/ Orthodoxy around the world / Orthodox Mission in modern times
<--Back 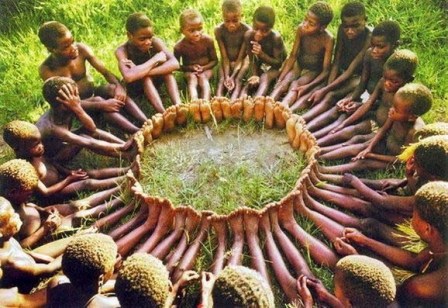 Within the framework of His divine economy, God has been calling faithful and devoted servants of His throughout the ages and continues to call  upon them to this day to sow the Good News of the Gospel in countries whose people have not yet encountered the doctrine of Salvation of the Orthodox Church.

It is my belief that compared to other continents Africa and Asia are behind in the matter of receiving the Word of God. The reasons for this backwardness are many and varied, and we are unable to list them in the scope of this book.

But in recent years, to the great joy of all believers Orthodox Mission has witnessed a reawakening. Certain individuals from Greece and other countries, for the most part independently motivated, have undertaken to communicate the Good News of Salvation to other peoples of this earth.

In this articles we shall endeavour to report some instances of the miraculous work of Orthodox Mission in modern times, achieved by Orthodox missionaries at the Mission Centre of Kolwezi in Zaire.

The personality of the first missionary, Father Chrysostom, is already well known. At the age of about 60, he left his pastoral ministry in his home country of Greece in order to travel to Central and East Africa in 1960. Without prior organisation and without fellow workers or any official support from the Church, he spent twelve years performing his missionary work there in very difficult circumstances.

To begin with he stayed and worked in Kenya, Uganda and Tanzania, before finally arriving in Zaire, in Kolwezi to be precise, in August 1972.

He stayed in Kolwezi three months and taught about one hundred catechumens whom he subsequently baptised. According to the information given to me an elderly Greek from Kolwezi, Father Chrysostom chose to take up residence with a Greek household and converted one room of their living quarters into a small church.

A group of Zaireans from Kananga in the region of the western Kasai, having learnt that the true church of God is the Orthodox Church, came looking for him to ask him to visit their community too. Father Chrysostom went to Kananga in October 1972. He worked there for only two months before finally coming to the end of his life on earth towards the end of December 1972. He was buried in Kananga.

After his death two new missionaries arrived to continue the work left behind by Father Chrysostom: Father Chariton Pnevmatikakis in Kananga and Archimandrite Amphilochios Tsoukos in Kolwezi. The latter of whom was from the Greek island of Patmos and was the spiritual son of Father Amphilochios Makris. He spent five years working in Kolwezi.

He returned to Greece in the summer of  1977 and the work was then continued for two years by Hieromonk Seraphim Parcharidis. He in turn was forced to abandon the Mission in August 1978 having been seriously wounded during the troubles that arose in Kolwezi that year. Seven other Greeks lost their lives in the course of events.

In the month of November 1978, Father Cosmas (Aslanidis) left the Monastery of Saint Gregory on Mount Athos, with the blessing of the Abbott Father George, and came to the Kolwezi mission, where he worked until 1989. It was God’s will for him to live only until that year, for he died suddenly in a tragic car accident at the age of 47.

Forty days later, in response to the urgent prayers and appeals of Metropolitan Timothy of Central Africa, the Monastery of Saint Gregory sent Hieromonk Father Meletios to Kolwezi as his successor, and he continues to this day the work of his former brothers with the aid of God’s power and blessing.

In the pages that follow, I will endeavour to lay before the friends of Orthodox Mission the miraculous signs attending the history of the mission during the times of Father Cosmas and his current successor. I thought it necessary to put into writing and so rescue from oblivion the various facts and episodes which constitute the recent history of our mission, to the glory of God and the spiritual profit of those who read it and those who may provide financial aid for our work.

HISTORY OF THE LIFE OF THE LATE FATHER COSMAS

During a visit to our Monastery, Father Cosmas told me the story of his “plunge” into the lake which is to be found near our Mission’s farm in Kolwezi, to save a boy who had drowned there and whose body was lying at the bottom of the lake.

It was during the afternoon. As Father Cosmas was passing the lake, he saw a large gathering of people crying. When he learnt the reason why, he asked them to calm down: “Do not cry. I will dive in and pull him out,” he told them. He stepped back, took off his cassock so that he was left in trousers. They showed him the place where the child had slipped and fallen in while fishing. He proceeded to dive in three successive times where the water was about ten metres deep. On the third occasion, he pulled the child from the water. The tears of the crowd turned to songs and dances of indescribable joy to demonstrate their gratitude. And Father Cosmas used to add:”When I served in the Greek navy I was a deep-sea diver. I never expected then that twenty years later I would be able to make use in such a way of what I had learnt in the Navy.”