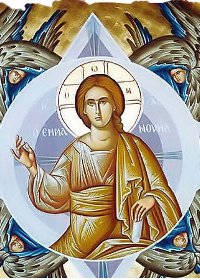 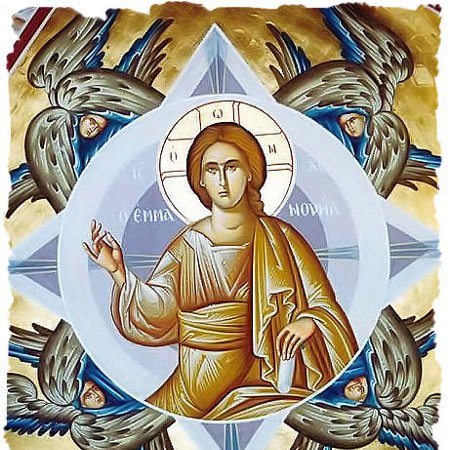 All things were made by him; and without him was not anything made that was made. (John 1:3)

Who is Christ? We hear one, two thousand different opinions. One person says he is a philosopher, another that he is a sociologist, and yet another that he is a poet. Others say still other things. Today’s Gospel reading gives us the correct answer: it says that Christ is God. You believe this? Then you are a Christian. You don’t believe this? Then you are not. You may well belong to one school of philosophy or another, but you are not a Christian!

Further on, the Gospel says that Jesus Christ, the second person of the Holy Trinity, is he through whom all things were made – all things both seen and unseen. “All things,” it says, “were made by him; and without him was not anything made that was made.” (John 1:3). This requires analysis.

These God-inspired words speak of the world’s ontology, of the creation of things in other words. One of humanity’s ten greatest spiritual men, Blessed Augustine (whose name I unworthily bear), says that all the created things around us, from those we see through a telescope to those which may only be seen through a microscope, belong to the following four categories.

To the first category belong those things which are endowed with ‘being’ and being alone. In other words, they simply exist. What are these? They are the dust of the earth, the water, stones, the hills, priceless and useless metals, minerals, but also the heavenly bodies – the stars and even the galaxies.

To the second category belong those things which have something beyond being: they grow. What are these? They are the plants and the trees. Beyond existence, these things grow. Where does a tree begin? As a small seed. This seed then falls to the earth and grows. It is watered and it grows. It sprouts; it grows and develops, becoming a great tree.

On to the third category. According to Blessed Augustine, those things which belong to this category have something beyond existence and growth: they feel. Which things are these? These are the animals. A cute little lamb, for example, exists, grows and feels. It feels pain. O how it suffers these very days at the hands of men who slaughter it for their Paschal feast! Animals feel. Some of them even have senses which are stronger than those of other beings. The eagle, for example, has a sharp eye, he has crystal-clear vision, or what we call an ‘eagle-eye’, which allows him to soar as high as the sun and yet from this height he is able to discern the most miniscule thing on the earth below. The dog has both a very keen sense of smell and excellent hearing. I have read somewhere that in London the police have special dogs, as well as officers equipped with whistles which, when blown, cannot be heard by man. Only the dogs can hear these whistles. When the dogs hear these whistles they run immediately to find the officer calling them. The dog is also the first animal to sense an earthquake; he senses it even before the seismograph.

In summary; rocks have ‘being’, they just ‘are’; the trees both ‘are’ and ‘grow’; the animals ‘are’, ‘grow’ and ‘feel’. And now we have arrived at the peak of the ladder of beings; we have arrived at man. Man is matter, he is earth – we do not deny it! – and thus he has ‘being’. He grows, since from an embryo, from a little child, he grows into a full-grown man. He also feels, for he too experiences pain. He does not have these things alone, however; he also has something beyond these. What does he have beyond these? It is that he thinks; he has a mind. O, the human mind! Let them say, let them shout, that man comes from the ape, from the orangutan! This is a grave error. What separates us from the animals is the ability to think. The mind is a great thing. Next to it, the computer is nothing. The computer is nothing – a toy – next to that incomprehensible piece of equipment which we call the human intellect. It is this which separates us from all other beings. It is by means of the intellect that man understands, that he plans, that he invents, that he creates. Take an ape. Put him in school for ten years. He will not learn the alphabet; he will only grunt! From the time he is a young student, man grows in knowledge, eventually becoming a wise researcher or inventor. He is capable of progress on account of his intellect.
There are, then, four categories of beings. First, those things that ‘are’; second those things that ‘are’ and ‘grow’; third, those things that ‘are’, ‘grow’ and ‘feel’; and fourth, those things that ‘think’. Have we finished with the ladder of beings, I wonder? No! Because there exist not only those being that we see, but also those we cannot see. Those things that we see are few in comparison with those we cannot see. Beyond the world we see is found the invisible world which is infinite and wondrous. It is in this world that the bodiless hosts, the heavenly powers, the angels and archangels, are found, as well as the souls of men which have passed from the earth, and the demons who of their own will fell away from the aim for which they were created.

My brothers, this is the pyramid of beings, “of all things visible and invisible,” and at the peak of this pyramid is the Creator, the Triune God. As the Fathers and teachers of our Church teach, all things are made by the Father, through the Son, in the Holy Spirit. This dogma, this truth of our faith, is affirmed in today’s Gospel which says concerning the Son and Word of the Father: “All things were made by him; and without him was not anything made that was made.” The Son and Word of God, who humbled himself and came down to the earth, was incarnate, was crucified, and who arose from the dead and whose resurrection we celebrate today, is he, “by whom all things were made”.

All things, everything, from the smallest to the greatest, from the grass which we walk on to the huge trees, from the mite to the elephant, and from the atom to the planets and galaxies which swirl in outer space, all things were made by Christ. Do you believe this? Then you are a Christian. You don’t believe this? That is your right. Christ and the Church do not need followers. I am in favour of a Church of quality, not a Church of quantity. Thousands of faithless people are not worth one faithful Christian. He who believes does not say, “I have my opinion”. What is your opinion, sir? What God says here in the Gospel: “All things were made by him; and without him was not anything made that was made.”

To Christ himself, the eternal God – in spite of the atheists and unbelievers of all ages – to him be glory, honour and worship unto the ages of ages. Amen.

The Creator of All