/ Catechisms and articles / Sunday after Christmas
<--Back 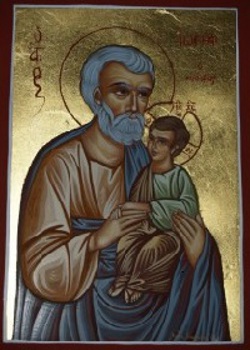 “Christ is born, let us glorify Him” and on earth a great mystery is taking place. God is incarnated and takes up all the human nature.

Angels and Archangels, the Cherubim and the Seraphim glorify God, for they see God becoming Man for the Love towards man and, simultaneously, the see man ascending into Heaven. Today, Bethlehem imitates heaven, for instead of stars she is receiving Angles, who sing the Incarnated Word of God; and instead of the sun, which shines during the day, she received the Sun of Righteousness, Who enlightens men’s souls and hearts.

The Word of God wanted and was incarnated, for whatever God wants all the rules of nature are placed aside. Today, God is born and becomes that which He was not before. He is God and becomes Man, without decreasing His Deity. No one should think, that man became God, but the Word of God the Father “became flesh” and simultaneously His Divine Nature remained unchanged and without passion.

When Christ was born, the Jews renounce the strange way of His birth. The Pharisees miss-interpreted Scriptures and the Scribes speak in contract the Law. Herod was seeking for the New Born Infant, not to honour Him, but to kill Him. Magi from the East visited the Heavenly King admiring, how He came down on earth without the company of Angelic Hosts, but with a strange way was born of the Virgin? The women serve Him Who was born of Mary, in order that the pains of childbirth are changes into joy. The virgins admire how Mary is honoured to become a Mother and simultaneously She remains a Virgin? The Word of God becomes an Infant, in order to receive doxology from the mouths of infants. The shepherds worshipped the Shepherd, Who will sacrifice His Life for the salvation of all. The Master became a Servant, in order to free men from the slavery of the enemy. The sinners came to see the Lamb of God, Who takes away the sins of the world.

Everyone rejoices and celebrates. Together with the Angles we sing: “Glory to God in the highest and on earth peace amongst men according to God’s Good Will”. The Word of God, Who is begotten from the Father, is born from the Virgin to save man. He is begotten from the Father before all ages. But, today, we have received His consent and His eternal Birth is real and His earthly Birth is without any doubt. He is true God begotten from a true God, and was Incarnated from the Holy Spirit and of the Virgin Mary and became Man. He is the Only-begotten Son of God the Father in Heaven, and is the Only-begotten Son of the Virgin on Earth.

What can anyone say? He is God Almighty, or is He a small man ? Is He the King of the Angels, or a Servant of men ? Is He the Creator of all things, or is He created by the Virgin ? Is He the Invisible God, or a visible man ? Is He without passion and immortal, or is He subject to passion and mortal ? Is He the Word of God the Father Who existed before all times, or the Son of Mary ? St John of Damas confesses Him to be “perfect God, and perfect Man”. The mystery is strange, for the two Natures of Christ are united with confusion and intermingle one in the other without confusion or change. As the Three Hypostases of the Holy Trinity are united without confusion, and at the same time, without being divided, they are distinguished in One Essence or Nature, in a similar manner the two Natures of Christ, Divinity and Humanity, are united in one Hypostasis, without confusion; and neither the humanity is changed into Deity, nor the Deity into humanity.

We worship the One Lord Jesus Christ, Who has one Hypostasis, but in two Natures, two Wills and two Energies.

Today, the Word of God is incarnated as an Infant. As a Man we see Him in the Manger vested with swaddling-clothes and is nurtured by the Virgin with maternal milk.

Today, the shepherds go to Bethlehem to see the Incarnated Word of God. The Son of God in the peaceful moments of the night is born and is seen by the Virgin. The shepherds admire, the Magi surround Him and the Angles praise Him. Now, we see the Invisible God Incarnated. “And the Word became flesh and dwelt amongst us” (John 1:14).

Only, when the King of Peace rules within our hearts, then peace will rule amongst men in the entire world. Let us struggle to imitate those shepherds of Bethlehem, in receiving and spreading the message, that “a Saviour ha been born today in Bethlehem of Judaea” and let us sing together with the Angles: “Glory to God in the highest and on earth peace amongst men according to God’s Good Will”. Amen.