/ Catechisms and articles / Sts Peter and Paul
<--Back 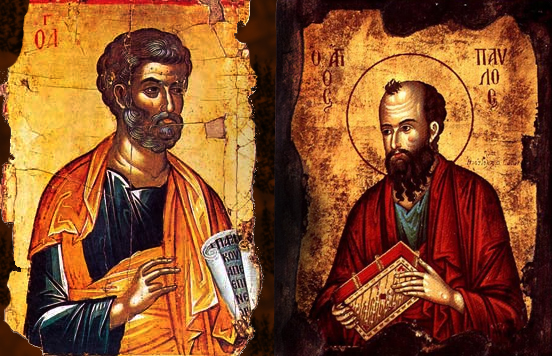 With what Crowns of Praise

With what crowns of praise Shall we crown Peter and Paul?… The former as the leader of the Apostles the latter as the one who toiled more than the others.

June is always marked by the festive commemoration of the Holy Apostles Peter and Paul which is observed by our Church on the 29th day, and indeed after fasting in honour of the chief Apostles.

The 29th of June, certainly is not the day they suffered martyrdom. Rather it is the day that in 258 AD, Pope Sixtus II transferred their very sacred relics to the catacomb of St. Sebastian in Rome. Since then, this day, as a day of common honour for both Apostles, overshadowed the day of their individual martyrdom and so from ancient times the Church honours Peter and Paul together. Not only with a common feast day but also with a common fasting period for both. Indeed the fasting period -to note as a parenthesis- during which eating fish is also permitted on Saturday and Sunday [according to a stricter tradition] or on all the days of the week except Wednesday and Friday [according to a more lenient tradition], starts on Monday after the Sunday of All Saints and ends on the 28th of June. But if Easter falls on the 3rd of May or later then there is no fast for the feast of the Apostles).

Our Church also honours them with Icons which depict the two together, either embracing themselves in a brotherly love in Christ or holding in their hands the Church in the form of a small Byzantine church so emphasising the unity of the faith and the unity of the Church mainly consisting of two different elements: The old Israel (the Jews) to whom, in the main, the missionary work of Peter was directed at, and the Gentiles (the Pagans) who correspondingly were the objects of Paul’s missionary work. Also they are honoured with common churches named after both of them. And with common hymns like the one of the vespers of their feast which we have placed as the beginning of these humble lines.

With what crowns of praise shall we crown Peter and Paul? What worthy words can one find to laud the chiefs of the Apostles? What forms and ornaments of speech can one employ? What kind of poetic blossom would he gather to dedicate to them?

What can be worthy for Peter, who, when he declared that our Lord is ‘Christ the Son of the Living God” (Matthew l6:16), revealed the unshakeable stone onto which is founded and based the true faith of those who are saved and thus he himself at the same time became the first stone of the spiritual edifice of the Church?

What can stand worthy to praise “the imprisonment in various cities and the af-flictions” of Paul “the hard work and toil, the sleeplessness the sufferings of hunger and thirst, the cold and nakedness, the bas-ket, the beatings with a stick, the stoning, the journeying, the death of the sea, the shipwreck” that he endured “so that he would win people for Christ Jesus his Lord” as the muse of St. Andrew, Archbishop of Crete is wondering?

How can you praise the “Mouth of the Apostles” who “lifted up his voice and said to them” (Acts 2:14) in front of the crowd on the day of Pentecost and as many as heard this first holy divine voiced sermon of his “were pricked in their hearts” (Acts 2:41) and were baptised “and the same day these were added three thousand souls” to the Church? (Acts 2:41).

How can you praise the God-called “Teacher of the Churches who ” made all things to all men that he might by all means save them”? (1 Corinthians 9:22).

What can you first bring to memory about Peter and laud him? The enthusiasm? The humility? The saving and redeeming tears of repentance after that third “I do not know this man”? (Matthew 26:75) After this denial his complete dedication to the Godman and his triple confession of love to Him for which he heard from His mouth “feed my lambs” and “feed my sheep”? (John 21:15-17). His God-wise teaching which is contained in his two General Epistles or his all holy martyrdom for Christ in the “EternalCity” where he irrigated with his scarlet blood the newly grown tree of the Church of Rome?

What can you first call to mind about Paul and praise him? His godly zeal with which he repeatedly travelled round the Mediterranean with infinite dangers, hardships and problems in order to evangelise to its people the salvation in Christ? His patience to the “thorn in the flesh” which God granted to him to buffet him for life? (2 Corinthians 12: 7-10). His courage in front of the rulers of this world?

His politeness which made him respect even the high priest of the Judeans who transgressed the law? (Acts 23:5). The bottomless depth of his humility by reason of which, when he remembers the time that he was an enemy of the Church, he calls him-self “as one born out of due time” (1 Corinthians 15:8) and “least of the Apostles” and he comes to say “I am not great to be called an Apostle because I persecuted the Church of God? (1 Corinthians 15:9). His care and the unquenchable interest and fatherly anxiety for the spiritual development of the faithful and the support of the churches at different places as it is so characteristically evident from “by the space of these years I ceased not to warn everyone night and day with tears (Acts 20:31) and from the most affectionate “my little children of whom I travail in birth again until Christ is formed in you (Galatians 4:19) and the so responsible “that which comes upon me daily, the care of all churches” (2 Corinthians 21:28). His perfect love which compelled him to say that unrepeated “who is weak and I am not weak? Who is offended and I burn not?” (2 Corinthians 21:29). His laboriousness and the refinement of his soul which made him, despite the burden of the Apostolic duties to also pursue the humble craft of the tent maker in order to procure himself “food and clothing” so that he could preach without expense the Gospel “and not to be burden to anybody. His not loving money which made him say with modesty “I have coveted no man’s silver, or gold or apparel (Acts 20:33). Which of his virtues and which of his graces would you first bring to your memory? Only you stop at his last sacrifice, the culmination of all his unrending, unceasing throughout his life sacrifices for Christ, the sacrifice of his blood under the sword of Nero and you stop going any further by respecting the greatness of the all holy man.

With such facts on the one hand and the writer of this not having the necessary prerequisites to attempt to say words worthy of the “holy luminaries of the world” on the other, it naturally follows that the say should be given to the holy hymnographer of the Church, who expresses the voice and the conscience of her holy Body, to conclude these poor and unworthy lines with the idiomelo of Psalm 50 of the Orthros of the feast of the Apostles:

“Peter, the leader of the glorious Apostles the rock of the faith and Paul divine of the holy Church the orator and luminary who stand beside the divine throne, Intercede for us”.