Thy will be done on earth, as it is in heaven

Man’ s selfish will separated him from God, exiled him from Paradise and caused all his misfortunes. If man does not renounce his selfish will and does not adopt the holy will of God, he cannot be cured of the seriοus illness of selfishness and egoism.
Christ, the New Adam, and the Theotokos, the New Eve, with their total obedience outbalanced Adam’s and Eve’s disobedience to the holy will of God.
Christ was obedient to the will of His Father to the point of death, to the point of death οn a Cross. At Gethsemane, Christ in extreme anguish gave Himself totally over to the will of God the Father, ”Ο my Father, if it be possible, let this cup pass from me; nevertheless, not as Ι will, but as thou wilt” (Matt. 26, 39).
Thus, through His obedience, Christ opened up for us the path to God and became the spiritual head of the race of the obedient children of God.
Every Christian who abjures Satan with Holy Baptism and sides with Christ promises to come under Christ’s obedience.
With this petition we ask for the Grace to carry out the will of God, οn behalf of ourselves and all people. We ask for the will of God to be done completely, as is done by the holy angels, who are totally obedient to God. Saint Chrysostom interprets, “Thus, render us men worthy to carry out Your will, not half-done but always completely, as you desire”. And he adds, ”And again He dictates to each one of us, who pray, to care for the welfare of the whole world. For He did not say thy will be done in me or in us but upon all the earth, so that deception disappears and truth is planted and all vice is uprooted and virtue returns again, so that neither heaven nor earth are different in this respect. For, if this could be done, He says, there will be no difference between heaven and earth, although they differ ίη their nature, since earth will have her own angels to show us (ibid. 674).
Saint Chrysostom preached and urged the Christians to live the perfect Christian life so that they experience the Kingdom of God before reaching eternal life. So that the earth becomes heaven.
Men keep God’s commandments either from fear of going to hell or in order to receive reward from God or, still, out of clean and unselfish love for God. Ιn the first case they behave as slaves, in the second as servants and in the third as sons. We must all aim for the last one. We must do the divine will out of pure 10ve of God, as His sons. This is a sign of perfection. This is what the holy angels in heaven do.
As long as man carries out his own will, he can not find true inner peace. When he performs God’s will, he is reconci1ed with God and finds peace. This is the peace from οn high, that we ask for in the Divine Liturgy.
According to the holy Fathers, God Himself is to be found in His commandments. For this reason whoever keeps God’s commandments unites with God. 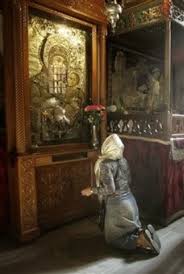 However, even when we keep all the commandments, we will still consider ourselves ‘filthy slaves’, according to the word of the Lord. This is because the Grace of God is that saves us and not our own good deeds. The pharisaical self-justification has no similarity to the humble, Orthodox Christian morals. As Saint Seraphim of Sarov taught, our good deeds are not οnly a presupposition in order for us to receive the Grace of God, but they are also fruit of the Grace of God. However, good deeds can never become the goal of Christian life. The goal is the acquisition of Divine Grace.
Keeping God’s commandments, which ίη depth express the comprehensive virtue of love, directs us to true freedom, to the freedom of love that liberates man from egoism. Freedom of that liberates man from egoism. Freedom of egoism is a pseudo-freedom. The Christians, by choosing to obey God, choose the freedom of love that presupposes the crucifixion and the sacrifice of our egoism.
It is what the holy Fathers, through their struggle and experience say, ‘Όbedience is life, disobedience is death”.