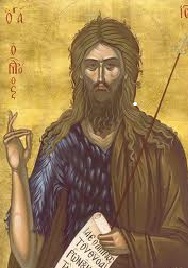 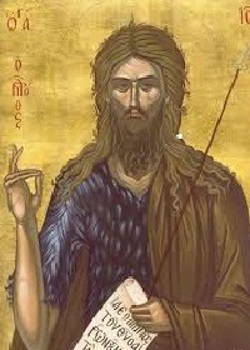 St. John the Baptist (c. 6 BC – c. 36 AD) was an itinerant preacher and a major religious figure who led a movement of baptism at the Jordan River. Some scholars maintain that he was influenced by the Essenes, who were semi-ascetic, expected an apocalypse, and practiced rituals conferring strongly with baptism, although there is no direct evidence to substantiate this. John is regarded as a prophet in Christianity.

Most biblical historians agree that John baptized Jesus at “Bethany beyond the Jordan,” by wading into the water with Jesus from the eastern bank. In addition to the Canonical gospels, John the Baptist is also mentioned by Jewish historian Josephus, in Aramaic Matthew, in Pseudo-Clementine, and in the Qur’an. Accounts of John in the New Testament appear compatible with the account in Josephus.

John anticipated a messianic figure who would be greater than himself, and, in the New Testament, Jesus is the one whose coming John foretold. Christians commonly refer to John as the precursor or forerunner of Jesus, since John announces Jesus’ coming. John is also identified with the prophet Elijah, and is described by the Gospel of Luke as a relative of Jesus. Some of Jesus’ early followers had previously been followers of John.

The beheading of St. John the Baptist is a standard theme in Christian art, in which John’s head is often depicted on a platter, which represents the request of Herod’s stepdaughter, Salome. In Orthodox icons, he often has angel’s wings, since Mark 1:2 describes him as a messenger.

Gospel narrative: All four canonical Gospels record John the Baptist’s ministry, as does the non-canonical Gospel of the Hebrews. They depict him as proclaiming Christ’s arrival. In the Synoptic Gospels (Mark, Matthew, and Luke), Jesus is baptized by John.

Birth and infancy: The Gospel of Luke includes an account of John’s infancy, introducing him as the son of Zachariah, an old man, and his wife Elizabeth, who was barren. According to this account, the birth of John was foretold by the angel Gabriel to Zachariah, while Zachariah was performing his functions as a priest in the temple of Jerusalem. Since Zachariah is described as a priest of the course of Abijah and his wife, Elizabeth, as one of the daughters of Aaron, this would make John a descendant of Aaron on both his father’s and mother’s side.

The Gospel of Luke states that Jesus was conceived when Elizabeth was about six months pregnant, and when her cousin Mary came to tell her about her news, Elizabeth’s unborn child “jumped for joy” in her womb. Zachariah had lost his speech at the behest and prophecy of the angel Gabriel, and it was restored on the occasion of Zachariah naming John.

Ministry: All four canonical gospels relate John’s preaching and baptism in the River Jordan. Most notably he is the one who recognizes Jesus as the Messiah and baptizes him. The baptism marks the beginning of Jesus’ ministry. The Gospels of Mark, Matthew and (most clearly) Luke relate that Jesus came from Galilee to John in Judea and was baptized by him, whereupon the Spirit descended upon Jesus and a voice from Heaven told him he was God’s Son. The Gospel of John does not record John’s baptizing Jesus, but John introduces Jesus to his disciples as the “Lamb of God” (John 1:29-36).

Considered by Christians to be without sin, Jesus nevertheless received John’s baptism, which was for the repentance of sins (Mark 1:4). This is addressed in the Gospel of Matthew’s account, which portrays John’s refusal to baptize Jesus, saying, “I need to be baptized by you.” Jesus persuades John to baptize him nonetheless (Matthew 3:13-15).

The Gospel of John reports that Jesus’ disciples were baptizing and that a debate broke out between some of the disciples of John and another Jew about purification. In this debate John argued that Jesus “must become greater,” while he (John) “must become less” (John 3:22-36). The Gospel of John then points out that Jesus’ disciples were baptizing more people than John (John 4:2). Later, the Gospel relates that Jesus regarded John as “a burning and shining lamp, and you were willing to rejoice for a while in his light” (John 5:35). The Book of Acts portrays the disciples of John as eventually merging into the followers of Jesus (Acts 18:24-19:6), a development not reported by the Gospels except for the early case of Andrew, Simon Peter’s brother (John 1:35-42).

Death: In the Gospel accounts of John’s death, Herod has John imprisoned for denouncing his marriage, and John is later executed by beheading. John condemned Herod for marrying Herodias, the former wife of his brother Philip, in violation of Old Testament Law. Later Herodias’ daughter Salome dances before Herod, who offers her a favor in return. Herodias tells her to ask for the head of John the Baptist, which is delivered to her on a plate (Mark 6:14-29). The Gospels recall the teaching of John, that he called for Israel to purify herself through baptism (Matthew 3:1-12). So the Gospels’ description of John’s death focuses on the final reason Herod had for arresting John, which was religious. So it may have been that Herod wanted John arrested because he was a political threat, and John’s condemnations of Herod’s marriage was “the final straw”.

John the Baptist and Old Testament prophecy: Christians believe that John the Baptist had a specific role ordained by God as forerunner or precursor of Jesus, who was the foretold Messiah. The New Testament Gospels speak of this role. In Luke 1:17 the role of John is referred to as being “to turn the hearts of the fathers to the children, and the disobedient to the wisdom of the just; to make ready a people prepared for the Lord.” In Luke 1:76 as “… you shall go before the face of the Lord to prepare his ways” and in Luke 1:77 as being “To give knowledge of salvation unto his people by the remission of their sins.”

There are several passages within the Old Testament which are interpreted by Christians as being prophetic of John the Baptist in this role. These include a passage in the Book of Malachi 3:1 that refers to a prophet who would prepare the way of the Lord:

“Behold, I will send my messenger, and he shall prepare the way before me: and the Lord, whom ye seek, shall suddenly come to his temple, even the messenger of the covenant, whom ye delight in: behold, he shall come, saith the LORD of hosts. — Malachi 3:1and also at the end of the next chapter in Malachi 4:5-6 where it says, “Behold, I will send you Elijah the prophet before the coming of the great and dreadful day of the LORD: And he shall turn the heart of the fathers to the children, and the heart of the children to their fathers, lest I come and smite the earth with a curse.”

The Jews of Jesus’ day expected Elijah to come before the Messiah; indeed, some modern Jews continue to await Elijah’s coming as well, as in the Cup of Elijah the Prophet in the Passover Seder. This is why the disciples ask Jesus in Matthew 17:10, ‘Why then say the scribes that Elias must first come?’ The disciples are then told by Jesus that Elijah came in the person of John the Baptist,

“Jesus replied, “To be sure, Elijah comes and will restore all things. But I tell you, Elijah has already come, and they did not recognize him, but have done to him everything they wished. In the same way the Son of Man is going to suffer at their hands.” Then the disciples understood that he was talking to them about John the Baptist”. — Matthew 17:11-13

“Now this was John’s testimony when the Jews of Jerusalem sent priests and Levites to ask him who he was. He did not fail to confess, but confessed freely, “I am not the Christ.” They asked him, “Then who are you? Are you Elijah?” He said, “I am not.” “Are you the Prophet?” He answered, “No.” – John 1:19-21

Eastern Orthodox Church: The Eastern Orthodox faithful believe that John was the last of the Old Testament prophets, thus serving as a bridge between that period of revelation and the New Covenant.

St. John the Baptist (B)