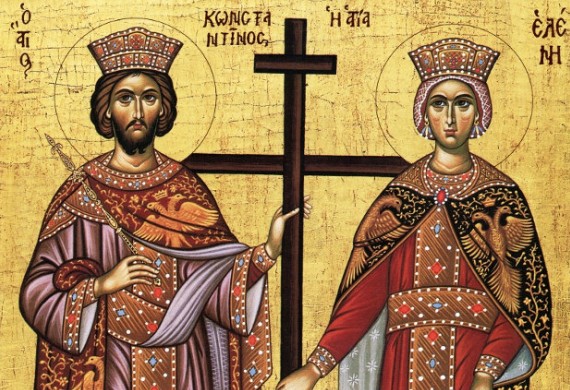 When one looks up into the sky, one will not only admire the excellent order and harmony of the universe, but will be moved by its unique decoration and beauty of so many stars and galaxies. In the same manner, when one looks up to the Church’s spiritual firmament one will be moved and admire the unique decoration of the uncounted illustrious stars of the Holy Prophets, Apostles, Teachers, Martyrs, Hierarchs and Saints, men and women of all ages and nationalities. Our Orthodox Church is celebrating, today, the feast day of two great saints, who illuminate with their paradigmatic and virtuous life. The first is St. Constantine, Emperor of Rome, who freed the Church from the unspeakable persecutions and established the foundations of the new Christian Empire of Byzantium; the second is his pious mother, St. Helen, who out of piety searched and found, in Jerusalem, the precious Holy Cross of Saviour Jesus Christ.

St. Constantine was born in 288 A.D. in Naisos of Dacia by Constantius Chlorus and St.Helen. He was raised in the imperial surrounding of Diocletian and Galerius, as a hostage. When his father was declared Augustus of theWest part of the Empire, he was recalled by his father to Galatia, where, a short time after his arrival, his father died, the army proclaimed him Emperor on the 26th July 306 A.D.

St. Constantine issued an edict allowing religious freedom to his subjects, and at the meeting of Mediolana (Milan ?) on the l3th June, 3l3 A.D., with Licinius they set down the conditions of the Edict of Mediolana (Milan ?). According to this edict the Christians were able to practice their faith. The old laws, which were issued by their predecessors against the Christians, were abolished, and finally they returned the places of worship to the Church which had been confiscated. Constantine showed a direct and personal interest for the Church’s unity, who he wanted to be Her great benefactor. He called the First Ecumenical Synod of Nicene (325 A.D.) to solve the heresy of Arius and proclaim the true teaching concerning the divinity of our Lord Jesus Christ. He wished to abolish the division within the Church caused by the heretics.

He loved and honoured the Church and Her representatives. He was ambitious in spreading the Christian faith and he promoted the benefits of Church with faith and zeal. In his heart, the vision which he had experienced, played an important role in his life. The story says that during mid-day he saw an illustrious Cross in the sky, circled by an inscription of stars which wrote: “IN THIS YOU WILL VICTORIOUS”. With this symbol, he gained victory over his enemies and remained monarch of the Roman Empire.

St. Helen, the mother of this great man, and wife of Constantine Chlorus, was from a poor and unofficial family. She was nevertheless high respected by her son, who gave her the title of Augustess.

St. Helen showed her piety through her many benefactions to the Church and the building of new and illustrious churches in Bethlehem, Jerusalem, Constantinopole and in many other places throughout the Empire. When at an old age she travelled to Jerusalem to seek and find the Holy Cross. She died in the year of the Lord 335 A.D. in Constantinopole, but, her relics, according to the historian Eusebius, were carried to Rome.

The Orthodox Church honours and projects these two illustrious stars. The Church invites all of us, today, to become participants of this heavenly glory with our religious, moral and social recreation and renewal. The Church calls us to become the new way of life in society, where love and peace will rule amongst men. The Church is calling us to shine as stars in heaven, with the new ideas and legistations, which will become the reason to govern our life and society.

St. Constantine abolished his old self and entered into a new way of life, when he accepted the heavenly light of Jesus Christ. This resulted in that he inherited eternal glory and honour within the Church.

We, today, are called to abandon our old selves, who are wearable (??? Weary ?) and have died because of sin and the deception of this wicked world.

In this new creation all men are called to participate, all nations and all societies. They are called to abandon the old, in order to give themselves fully to the new of Him, Who is the fullness “of all and within all” (Col. 3:ll). This is what exactly St. Constantine achieved. He left the old city of Rome, the city of idolatry, and created a New Rome, Constantinopole, the capitol of the Orthodox Christian Empire. He abandoned his old self and allowed himself to be illumined by the divine and heavenly light of God’s Grace.

The new creation, as an idea and way of life, is worthy to be accepted by all those who love the truth and life. Because it has divine beauty, harmony and order; it has divine life and eternity, just as the ancient Demosthenes says, “only what is from God are always fixed and eternal”.

We must also change, as Christ wishes. We must receive the light from His divine and eternal Light, in order that our internal illumination and recreation be accomplished. We are called to shine with virtues and works of faith, just as the stars in heaven shine in the darkness. We are called to become in life “the light of the world” (Matth. 5:l4), as Christ said, “You are thre light of the world … let your light shine before men, that they may see your good deeds and give glory to your Father who is in heaven” (Matth. 5:l4, l6). The new creation in Christ is the fruit of man’s participation in God’s Grace, which is granted to all through the sacramental life of the Church.

Today, St. Constantine and St. Helen, are inviting us all to abandon the vanity of this world and to turn our attention to the new creation of Christ. This new creation abolishes all the mouldy way of life caused by sin and grants the true breath of the new life, which overcomes death and continues to shine in the firmament of the eternal beauty of God’s Kingdom and Eternal Life. Amen.