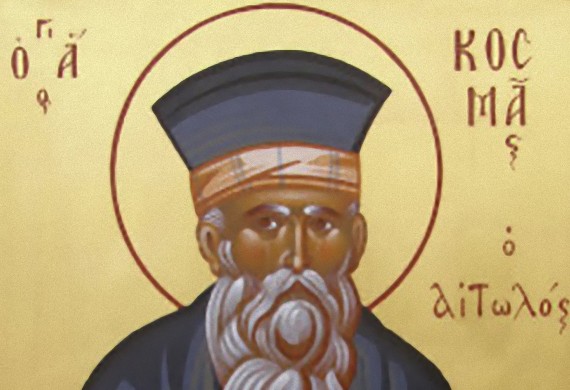 What did this man not do for the benefit of the Greek nation!

First, the young Christian women serving as wet-nurses to the tyrants’ children in the palaces of the Beys and Paschas were in constant danger of being lured away from the faith through various temptations, or of being lead into debauchery, and therefore of being lost completely. Saint Kosmas succeeded in convincing many Turks to release such women from their service by telling them that they would insight the wrath of Uranus on account of their debauchery and their mingling with women of foreign religions, and that their race would thus be wiped off the face of the earth. “Where,” he asked, “has your former glory gone? Are you not the ones who under Sulayman conquered lands as far away as Vienna? Your debauchery had humbled and destroyed you. Repent, cast out the Christian women you have in your palace.” On the other hand, he advised Christian women not to become wet-nurses to Turkish children lest they suffer the same fate as the hen who hatched the viper’s eggs in the Aesopian fable. According to Vasileios Zotos, author of The Dictionary of all the Saints of the Orthodox Church, some 1500 Christian wet-nurses who had been serving in the palaces of the Paschas and the Beys were set free as a result of the Saint’s activities.

Second, the villages of Epirius, Macedonia and Albania did not, for the most part, have baptismal fonts, and thus their infants were not receiving proper baptism. Saint Kosmas was shocked by this sin, i.e., that Orthodox children were not being baptized canonically and thus convinced the wealthy Greeks of Constantinople, Ioannina, and other Hellenic cities to donate money in order to have baptismal fonts crafted. As a result, 4000 copper-plated baptismal fonts were made and sent to all the village churches which did not have them.

Third, a great number of starving, half-dressed orphans, whose heroic fathers had been killed by the Turks, were found wandering the streets during this period. What could be done for these forgotten victims of the nation’s tragedy? Here again the love of a caring father worked wonders. In his teachings he strongly encouraged all Christians, particularly those couples which had no children, to take into their families one or two orphans. He encouraged them to do so irregardless of their financial status and as a result the rich blessing of God was visited upon their homes. Oh, how many orphans and poor children were saved as a result of the fatherly interest shown by this missionary preacher!

Fourth, from his touring the Greek countryside Saint Kosmas concluded with deep sorrow that there were virtually no schools to be found that Greeks might attend. Nearly all of the Christians, both men and women, were illiterate; one could, in fact, count on the fingers of a single hand the number of people in each village who were able to read and write. He spoke to the people with fervour concerning the great worth of education, of the necessity of Christian education, and of the how the next generation ought to be brought up, things which would later lead to the miracle of the revolution in 1821. “Open schools!” he cried everywhere, “Study, learn letters to the extent that you are able, my brothers. If you are unable to learn, fathers, have your children study and learn Greek instead since everything in our Church is in the Greek language. If you do not learn Greek, my brothers, then you will not understand that which our Church confesses. Better it is for you to have a Greek school in your village than for you to have springs and rivers, for when your child learns letters then he can truly to be called a man. The school opens churches; the school opens monasteries.”

As a result of the Saint’s activities, some 210 Greek schools were erected, and 1100 other smaller schools began to function at which Greek children were taught to read and write. A light – the light of Christian education, lit by the Saint himself – was cast upon a people who sat in darkness of ignorance. One lone man stood in for the Ministry of Education which remained inoperative during Turkokratia.

Where did the Saint find the sum of money needed to fund the construction and day-to-day operation of these schools, one might ask? He had no money of his own; like Christ he was poor and had nothing of his own. “I, my brothers,” he said, “by the grace of our Lord and God Jesus Christ, the Crucified One, I have neither purse, nor house, nor chest, nor another cassock than the one I am wearing. And I still beseech my Lord to never allow me to acquire until the end of my life a purse, for if I ever begin to take money, I have immediately lost my brethren. I cannot serve both; it is either God or the devil.” And yet this monk who possessed nothing of his own managed to collect such huge amounts of money for his work. How did he do this? Listen and I will tell you! During his travels, this missionary preacher, he noticed that women, no matter what their financial status, loved luxury, dressing in silken clothing, wearing rings, bracelets, earrings, chains, and ribbons of gold in their hair. Great wealth rested on the fingers, chests and heads of wealthy women; they were adorned with vanity! Saint Kosmas put a stop to this adornment. Through his teaching against such luxury, he persuaded Christian women to give up all this useless treasure, this gold, this silver, there precious stones for the good of the nation, for the establishment and operation of schools and, what wonder, they gave it all up! These treasures which he collected, then, represented the very beginning of a special fund, a fund from which alms might be given. The aforementioned author (V. Zotos) lifts up his voice to the most-high God in praise of these women who, at the moment they heard the Saint preach hastened to offer their expensive adornments, in praise of these admirable women as well as the Saint’s other co-labourers, offering the following moving words: “Merchants, builders, iconographers, teachers, priests, monastics and those living in the world followed the Saint’s teachings, facilitating the work of establishing schools and churches. We sing, ‘Memory Eternal’ to those women of Epirius who built 210 schools from the money attained from their jewellery and who endowed them with the extra which they had. A thousand times ‘Memory Eternal’!”

Fifth, by means of his fiery preaching the Saint managed to end the practice of opening the markets on Sunday, seeing that these were moved to Saturday (a fact which caused the Jews great sorrow, and lead them to bear a hatred-unto-death for him). He taught the importance of Sunday like no other, heaping burning coals on those who profaned it. He wanted Christians to love labour, to be ever cultivating the earth, and particularly to be planting trees. “Those who do not love trees and plants will live in poverty.” On account of the emphatic recommendation of the Saint, thousands of wild trees were grown and eventually bore fruit.

Saint Kosmas’ great influence cannot be entirely explained without taking into account another important element which contributed significantly to the tremendous progress he made in his missionary work. This element is exactly that which is noted at the end of Saint Mark’s gospel: “And they [the Apostles] went forth and preached everywhere, the Lord working with them, and confirming the word with signs following. Amen” And signs followed the Saint’s teaching for he has not only the gift of speech, but also the gift of working miracles and prophesying concerning the future.

6. Conclusion.
Beloved! What a missionary – a missionary “equal to the Apostles” as the hymnographer who wrote his service writes – Saint Kosmas was shown to be. Honouring his holy memory, let us give thanks to the Lord for this new luminary of the Orthodox Church, and let us also ascribe honour to those people who cooperated in Divine Providence, in the development of this great missionary figure of the later times. Let us first ascribe honour to his devout parents, who from his infancy nourished him with the pure milk of Orthodoxy, then to his teachers, to the wise Evgenios of Bulgaria, to his spiritual fathers and brethren on Mount Athos amongst whom he trained to become a true struggler for the faith. Finally, let us ascribe honour to the Patriarchs Seraphim and Sophronios of blessed memory, who encouraged him in his missionary work and furnished him with letters commending him to all the bishops of the Ecumenical Patriarchate.

This last aid was inestimable since without the permission and commendation of the Patriarchate, Kosmas would not have been able to circulate freely in Turkish-occupied Greece. This immediately brings the thought to mind: if Kosmas lived in our day, would he have received such support from the hierarchy of the contemporary Church? It is our fear that this apostolic man, who did not sugar-coat the weaknesses of those in ecclesiastical authority, but rather checked vice wherever he saw it (even if it was in Episcopal or Patriarchal courts), would not have been granted permission to preach. He would have been sentenced to return to the monastery of his repentance as a troublemaker and a threat.

Any who would cast a glance at the life of the contemporary Church would sigh bitterly at the lack of missionary figures like Saint Kosmas the Aetolian. If he tries to find the reason for this lack, he will find a multitude of causes; one of these, in my own view, is that the missionary inclinations of pure servants of the Gospel do not only receive no support in our day, but are condemned. They are condemned first and foremost by those who ought to be supporting them. This is a sorrowful observation.

Saint Kosmas the Aetolian as a Missionary