/ Saints and Elders - Lives / Saint Catherine of Alexandria
<--Back 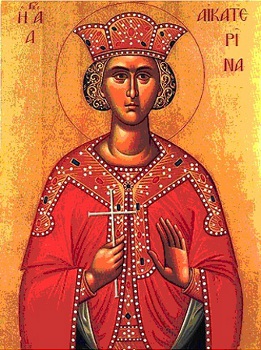 St. Catherine was the daughter of Costus, a pagan governor of Alexandria. She announced to her parents that she would only marry someone who surpassed her in beauty, intelligence, wealth, and social status. This was an early foreshadowing of her eventual discovery of Christ. “His beauty was more radiant than the shining of the sun, His wisdom governed all creation, His riches were spread throughout all the world.”

St. Catherine was born in Alexandria and raised a pagan, but converted to Christianity in her late teens. It is said that she visited her contemporary, the Roman Emperor Maxentius, and attempted to convince him of the moral error in persecuting Christians. She succeeded in converting his wife, the Empress, and many pagan philosophers whom the Emperor sent to dispute with her, all of whom were subsequently martyred. Upon the failure of the Emperor to win Catherine over, he ordered her to be put in prison; and when the people who visited her converted, she was condemned to death on the breaking wheel, an instrument of torture. According to legend, the wheel itself broke when she touched it, so she was beheaded.

Her principal symbol is the spiked wheel, which has become known as the Catherine wheel, and her feast day is celebrated on 25 November by most Christian churches.

St. Catherine was one of the most influential saints in the religious culture of the late middle ages, and arguably considered the most important of the virgin-martyrs. Her power as an intercessor was renowned, and firmly established in most versions of her legend, in which she specifically entreats God at the moment of her death to answer the prayers of those who invoke her name. The development of her medieval cult was spurred by the reported rediscovery of her body around the year 800 at Mount Sinai, with hair still growing and a constant stream of healing oil emitting from her body. There are a handful of pilgrimage narratives that chronicle the journey to Mount Sinai, most notably those of John Mandeville and Friar Felix Fabri. The monastery at Mount Sinai was the best-known site of Catherine pilgrimage, but was also the most difficult to reach. Other shrines were the focus of generally local pilgrimage, many of which are only identified by brief mentions to them in various texts, rather than by physical evidence.

Saint Catherine also had a large female following, whose devotion was less likely to be expressed through pilgrimage. The importance of the virgin martyrs as the focus of devotion and models for proper feminine behavior increased during the late middle ages. Among these, St. Catherine in particular was used as an exemplar for women, a status which at times superseded her intercessory role. Both Christine de Pizan and Geoffrey de la Tour Landry point to Catherine as a paragon for young women, emphasizing her model of virginity and “wifely chastity.”

Catherine have been highly learned (in philosophy and theology), very beautiful, sexually pure, and to have been brutally murdered for publicly stating her beliefs.

Devotion to Saint Catherine remains strong amongst Orthodox Christians. With the relative ease of travel in the modern age, pilgrimages to Saint Catherine’s Monastery at Mount Sinai have increased. St Catherine is called upon for relief and assistance during childbirth. Pilgrims to her monastery on Mt Sinai are given a ring, which has been placed on the relics of the saint as an evlogia (blessing) in remembrance of their visit.