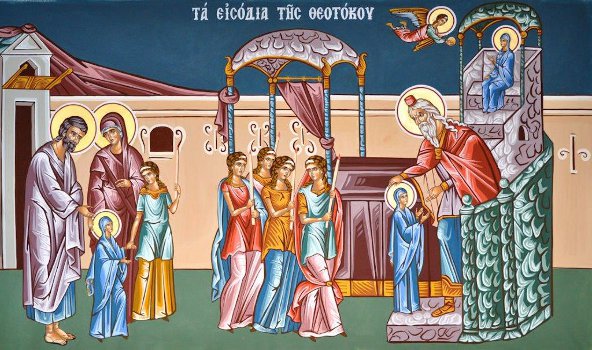 The faithful and all the heavenly Powers conjoin and concelebrate. Earth rejoices and the faithful Orthodox Christians gather to honor with all piety and respect the all praised Mother of our Lord and Saviour Jesus Christ, the Son of God. We venerate the holy icon of the Theotokos. With a humble and broken heart all those who suffer address their prayers to Her, in order to express their needs and beseech Her protection and help. All true faithful will bless Her, they shall sing hymns to Her and all generations will glorify Her. The Mother of God and Ever Virgin Mary, the Theotokos, is the source of our sanctification and salvation, for She had gave birth to the incarnated Son and Word of God.

The Entrance of the Ever Virgin Mary consist the preparation of the salvation of mankind. She enters the Holy of Holies, where only the High Priest was allowed to enter only once a year. The Prophet Zacharias, the father of St John the Forerunner and Baptist, and many young virgins receive Mary, when she was only three years of age, dedicated to God by Her parents Joachim and Anna.

The Ever Virgin Mary and Theotokos became the Mother of the Son and Word of God. Considering Her sacred and holy personality, the holy Prophets spoke of. Moses foresaw Her on Mont Sinai as the flaming but not burning Bush. Jacob foresaw Her as the Ladder, which united earth and heaven. Daniel, foresaw Her as theHolyMountain.

Today, the Ever Virgin and Mother of God, Mary, is entering into the most holy places of the earthlyTempleofGodinJerusalem; and is honored to become the most splendorousLivingTempleof our Lord and Saviour Jesus Christ, the Son of God.  She departs from the world and enters into theHeavenlyKingdom. Angels and men accompany Her; and the Mother of God is presented as a Queen dressed in gold.

Many important women have passed from history into the abyss of  forgetfulness. Many great queens with amazing power were erased and vanished from the memory of men.  But, the name of the Ever Virgin Mary and Theotokos remains immortal to the ages of ages. The name of the Mother of God moves, comforts and saves all those who with faith turn to Her.

The Holy Orthodox Church of God in all parts of the Earth chants hymns and songs to proclaim Her majesty. The prayers of the faithful are heard everywhere. The prophecy, which the Mother of God announced to Her cousin Elisabeth, the mother of St Johnthe Baptist, “hence all generations will call Me blessed”, is being fulfilled.

The glory and the majesty of the Mother of God are found in Her extreme humbleness. In order that one can participate in God’s glory, he must go throw the narrow path of humbleness. The Mother of God, although Her majesty, She never boasted or felt proud. She remained the humble Daughter, the longsuffering Mother, who for the sake of Her only Begotten Son, took upon Herself all the responsibilities for the sake of mankind’s salvation. She was a martyr and bereaved Mother, who faced the unjust suspicions thoughts ofSt Joseph.

The supernatural birth of Her Son was followed by Herod’s murderous persecution and the refuge in thelandofEgypt. The numerous miracles and the hailing of the people are followed by the insinuations and slanders by the Pharisees and Scribes of Israel, who had as their final goal to bring upon the Mother’s of God heart the bitter venom.

The cruel and humiliating death of Her Son, caused Her to suffer. She saw Her child on the Cross bleeding and struggling with death. She saw Him dead, necked and unburied. What pain and sadness was felt in Her motherly heart! At that moment the prophecy of St Symeon was fulfilled, who said to Her, “and through your heart a double edged sword will pass through”. But, the Ever Virgin Mary did not despaired; neither became short hearted, nor became angry because of the unjust slaughtering of Her Son. She suffered with patience the sufferings of Her Child as though they were Her own sufferings.

The Ever Virgin Mary and Mother of God, gives us the example which we should follow in order that we might be glorified also. Her humble state raised Her to the highest level of any heavenly glory. The Entrance of the Mother of God is the introduction of man’s salvation, which opened the Gates of Heaven. She became the precious jewel of Heaven, for She became the Gate of Heaven. She was the faithful handmaiden of the Lord, who suffered pain for whatever the Saviour of the world suffered. She is the safe port of all those who are in distress.

The Mother of God invites us all to enter into the Holy of Holies. She invites us to enter accompanied with the virtues and to become living temples of Her Son and our Lord and Saviour Jesus Christ. Through our holy life, we must honor today’s feast. The Entrance of the Mother of God into theTemplemust become a reason for us to experience our own entrance into the temple of virtues. Amen.

The entrance of the Theotokos. 21st of November