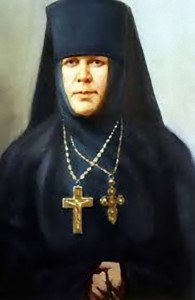 A Glimpse of Her Holy Life:

Abbess Thaisia was born in 1840 to a noble family in Novgorod. She was named Maria in honour of the Most Holy Theotokos who had granted Maria’s parents the safe arrival of their baby after two previous children reposed at birth. Little Maria was enrolled in the Pavolovsky Institute for young women in St. Petersburg where she received the (prophetic) nicknames ‘nun’ and ‘abbess’. Even at this young age Maria’s spiritual nobility began to emerge as she received multiple visitations of divine grace. To her mother’s dismay Maria disclosed that she wished to pursue monasticism. After her mother received a vision of the Mother of God reprimanding her for prohibiting Maria from following in the footsteps of countless holy fathers and mothers, Maria became a novice in Tikhvin at the Holy Monastery of the Entrance of the Theotokos into the Temple (the feast day is November 21). In 1870, at the age of 30, Maria was tonsured a nun with the name Arcadia. She was tonsured again, into a higher degree of monasticism, with the name Thaisia in 1872. Over the next 10 to 13 years or so Mother Thaisia lived in three or four different monasteries, suffering on account of poor living conditions and cruel treatment by the sisters. In 1885 Mother Thaisia was made Abbess of a convent in Leushino. Here she laboured to establish a firm foundation for the holy monastery, as well as set up a school for orphans of clergymen which later became a centre for spiritual education as an ecclesiastical college for girls. In 1891 she met her beloved spiritual father, St. John of Kronstadt, to whom she “poured out her soul”* even after his repose. In 1915, after serving as abbess for some 30 years, Mother Thaisia reposed on January 2. May we have her blessing!

Wise Counsel from the Abbess:

“It is through sorrows that the great designs of God’s Providence are manifested to us. ‘God is known in His burdens.’ But how heavy and hopeless our sorrows appear to our short-sighted and faint-hearted minds! We do not understand, we do not even want to see in the sorrows that befall us the great purposes of Providence; we are unable to obey God without murmuring” (Abbess Thaisia: An Autobiography, p.131)

“Commit yourself, I repeat, without defence to the will of your [spiritual] guides – give way to them, like clay to the potter, like iron to a smith; let them mold and hammer on the forge of obedience (as was expressed by St. John, author of the Ladder) your unruly and proud will, until it will be ground into the soft wax of humility, so that with understanding and discernment you may repeat the words of the Psalmist: “In our humiliation the Lord remembered us” (Ps. 135:23), or, “It is good for me that Thou hast humbled me, that I might learn Thy statutes (Ps. 118:71).” (Letters to a Beginner, p. 47)