/ Catechisms and articles / Sunday of the Ten Lepers. 12th Sunday of St Luke
<--Back

Sunday of the Ten Lepers. 12th Sunday of St Luke 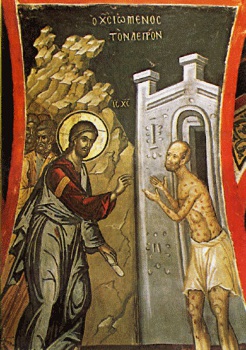 Leprosy in the past was considered an incurable illness which was vanished from Europe only during the last decades of the 20th century.
Death was slow and accompanied with great pain. The lepers were seeing their body’s parts decaying, rotting and breaking off, and their faces deforming. The worst of all was their isolation and loneliness. No one was allowed to approach them, for the danger that they might be exposed to the illness. But, even, if they had the courage to surpass this fear, then, only the view of their wounds was enough to scatter away even the closest and most beloved relatives. They were as living dead, awaiting death as their only deliverance.

( Photo: Miss Evangelia Nyktari offers medical assistance to a native Ghanian.)
Ten lepers, among so many thousands, condemned to continuous isolation, hopeless of any human help, had only one hope. They have heard about Jesus of Nazareth, the Teacher who was God sent and performed miracles. But, their problem was, how to meet with Him. They could not approach the cities or villages and for this reason the Lord Who knows the secrets of men’s hearts, guides Himself to the territory of the ten lepers.
The Ten lepers stood from a distance and with a loud voice the cried out: “Jesus, Master, have mercy on us!” The Lord, regardless of His tiredness, stood with great compassion and replied immediately to their request: “Go and show yourselves to the priests”, in order that they may, according to the Mosaic Law, confirm your healing. As they went their way towards Jerusalem, the miracle took place. The leprosy was cleansed. Their body’s parts were restored and healed; new skin appeared and covered their wounded bodies.  The miracle was completed. Now, one should wait to see all ten to return back to Jesus with joy, to give thanks. But, unfortunately, the nine did not return to give thanks to their benefactor. Only one as grateful enough to return and he was a Samaritan. The one who was a stranger to the Jewish nation returned and felt down to the ground to show his appreciation.
The rest were nine Jews, who were full with the spiritual illness of ungratefulness. They did not remember the beneficence! They did not remember in which condition they were and that they were now cured! They had forgotten everything; and thus the Lord questioned: “Were not ten made clean? But the other nine, where are they? Was none of them found to return and give praise to God except this foreigner?”
On the contrary with the nine lepers, what great example the grateful Samaritan had shown! We, today, enjoy the countless of God’s mercies and, yet, we also resemble the nine ungrateful lepers.
We enjoy the freedom of our country and yet, we enslave ourselves into the sinful passions, which are soul-destroying and destructive. We have been honoured with the unique charisma, to be “in the image and likeness of God” and yet, we darken this great honour and glory with a life so antichristian and unorthodox by surrendering ourselves into the sinful pleasures of the flesh.
When, instead of loving our neighbors, we cultivate hatred.  When, instead of forgiving, we harden our hearts and find it difficult to forgive our fellowman. When, instead of performing merciful deeds, we struggle to become richer.  When, instead of struggling to raise the morality of today’s society, we also participate in fornications and adulteries. When, instead of helping the youth to cultivate and realize the virtues, we lead them to drug abuse in order to receive riches through their death. When parents, instead of guiding their children to the Christian way of life, they encourage them to follow the dark path of sin. When, instead of helping out the workers, those who offer them work trespass against their rights and deprive them from their insurance and retirement plan. When instead of taking care of our parents, we ignore and through them into a retirement home or institution. Then, we must ask ourselves: are we imitating the nine ungrateful lepers?
Every sin is a spiritual leprosy of the soul. Although, our Lord and Saviour and God Jesus Christ granted us our spiritual health, yet, most of today’s Christians show so much ungratefulness to God and they turn to other places where they believe that they can satisfy their vain ambitions.
But again, how many times we show ungratefulness to one another, when we benefit from others? How many times we have done good and received ungratefulness? How many times we have shown love to friends and they responded with bitterness or pretended that they did not know us? How many times we have sacrificed ourselves and instead of a simple recognition or a heartfelt gratitude, we found ourselves ignored by those who we helped?
Either in family, or in society, or amongst the persons who serve within the Church, ungratefulness exists as a reality. The greatest example which we have is our Lord and Saviour Jesus Christ, the incarnated Word and Son of God, Who benefited all men, cured all the sick, taught with His heart, and yet, at the end He tasted the bitter cup of death on the Cross.
My beloved, let us examine ourselves how grateful we are to God and to our fellow man. As Orthodox Christians, we should be grateful to all for everything. Let us glorify God for His numerous mercies towards men. Let us be grateful towards our fellow men for their support. The teachings of St Peter, “be thankful for everything” must become a way of life for all of us.

Sunday of the Ten Lepers. 12th Sunday of St Luke