/ Catechisms and articles / God’s grace…even the birds paused
<--Back 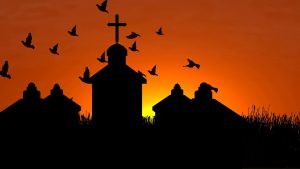 There was once a priest who was full of God’s grace and lived in a monastery in Romania. His name was father Menas and he later became saint Menas. After the conclusion of Divine Liturgy, the good father liked to go to the forest that surrounded the monastery, and there he prayed and glorified the Lord by chanting the wonderful hymns of our faith.

While he was doing that, the birds of the forest would gather around him; on his head, on his shoulders, and on his hands and the father would tenderly caress them. Most of the time when father Menas chanted, the birds would become silent and turn their heads to listen.

The service of the Divine Liturgy started very early every morning while it was still quite dark and it concluded around dawn. So at the time the father would finish the service the sun would be rising and that way he would go out into the forest, very early in the morning, and would enjoy the nature and the presence of the birds. And right there, all together, they praised and glorified God.

It was observed, in the last years of father Menas’ life, that when they were celebrating special festive Divine Liturgies and the service’s ending time was much after the rise of the sun, the birds would actually gather on top of the church! Everyone was amazed because at the time of the consecration of the bread and wine into the precious Body and Blood of our Lord Jesus Christ all the birds on the church would become silent! And as soon as the consecration prayers would end, and while the choir started chanting the hymn to our All Holy Theotokos, the birds once again started to chirp!

From the book ““Experiences during the Divine Liturgy”” of Stephanos Anagnostopoulos, a Greek priest and writer.