/ Catechisms and articles / On the 3rd Salutations
<--Back

On the 3rd Salutations 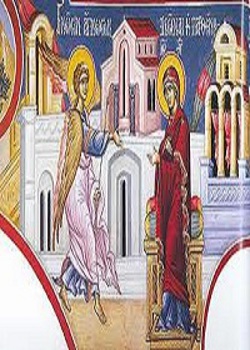 Because of God’s Love towards His creation, He did not leave alone the fallen man. The first promise which was given, when the first created were still in the Garden of Eden, now, is fulfilled. The Son and Word of God becomes Man in order to save man. The Incarnation brings a new hope to mankind. The coming of the God-Man showed that His appearance was for all Creation a “new creation”.

The Son of God was born, without any human intervention, but from the Holy Spirit and the Virgin Mary and He became Man born “from the womb without any seed”. The humbleness and obedience of the Mother of God and Ever-Virgin Mary, towards God’s Divine Will became the reason why God the Father had chosen her to become the Mother of His Son.

Considering His Divinity, the Son of God is without a mother; in other words, as God He has no mother, for the Deity is not created as this occurs in the laws of nature amongst the creatures, men and animals. The Son of God is begotten from all ages from God the Father as the light originates from the light; likewise, the Son is true God from true God. The Son was begotten from the Father with an inexpressible way, which only God the Father knows and was not created in time. The Son of God is the eternal Wisdom of God. He is the Existing God, Who in the Old Testament calls Himself “I AM”. The Word of God accepts to be incarnated in time in order to save His creation, which He Himself created.

Considering His humanity, the God-Man is fatherless, in other words He has no human father. Holy Scripture strictly declare through the mouth of Archangel Gabriel that the child to be born “is from the Holy Spirit”.  The “Power of the Most High, overshadowed” the Virgin and by the sanctifying Grace of the Holy Spirit she was made spotless and without any stain of sin. For, as Adam was created from the dust of the earth which was not polluted by sin and was pure and in a virgin state; likewise, the second Adam, Jesus Christ, had to be formed in a virgin and pure womb, which had not known sin. Consequently, on the day of the Annunciation, the Mother of God and Ever-Virgin Mary, was cleansed from the Original Sin and was honored to become the Mother of the Son of God according to His humanity. From the moment of the incarnation of the Son of God within the virgin’s womb, she became steadfast to every good and virtue, thus alienated by her own free will from all worldly pleasures. For this reason it is considered a blasphemy, if someone dears to say that the Mother of God and Ever-Virgin Mary, after the birth of Christ, had any relationship with St. Joseph or had any other children. And it is true that the New Testament mentions the names of Christ’s brothers (James, Judas, Simon and Jose), but these are the children of St. Joseph from his first marriage from which he begotten six children, four boys and two daughters. No were in Holy Scriptures the children of Joseph are mentioned as being children of Mary.

The Mother of God and Ever-Virgin Mary throughout the Holy Scriptures, Old and New Testament, is proclaimed to be a Virgin, which before the birth, at the time of the birth and after the birth of the God-Man, Jesus Christ, remains a Virgin forever.

The Prophet Isaiah proclaimed saying: “Behold a virgin is with a child, and she will bear a son, and you shall call his name Emmanuel” (Isaiah 7:14).  The Prophet Ezekiel in the 44th chapter of his book writes as follows: “And he turned me towards the path of the outer gate of the saints which faces towards east, and it was shut. And the Lord said to me: this gate is shut, and it shall not be opened, and no one shall pass through it, for the Lord God of Israel shall enter through it, and it shall remain shut”(Ez. 44:1-2).

You see, that before hundreds of years before the birth of the Mother of God, the holy Prophets under the inspiration of the Holy Spirit spoke clearly about her Ever-Virginity. For this reason, in Orthodox Iconography the Mother of God is depicted holding the infant Christ, being a true mother; whereas, three stars are placed on the two shoulders and one on her forehead, signifying the Orthodox Doctrine that before the birth (one star), at the time of the birth (second star) and after the birth (third star) of the God-Man, Jesus Christ, she remains a Virgin forever.

Those who do not confess the Ever-Virginity of the Mother of God prove one thing, their faithlessness to God’s wonders. For, if you do not believe that God is able to preserve the virginity of a pure girl, then how can you believe that God became man? Consequently, the hymn-writer calls the heretics and the unbelievers “philosophers without wisdom” and “illogic users of words”, who attempt with evil technics of words to twist and misinterpret Holy Scripture which speak about the Great Mystery of Mary’s childbirth.

Seeing this “strange birth”, we the Orthodox Christians accept with true faith and turning our “mind” to “heaven” we admire Mary as being the “doubtless pride” of all Orthodox and we cry out to her “hail, for through you Paradise has been opened”. For, as Eve became the reason for man to be exiled from the earthly Paradise and through the disobedience sin entered into the world and through sin death ruled; likewise, the Mother of God and Ever-Virgin Mary became the reason by which mankind found again the path “from earth to heaven”.

For us Orthodox Christians, the Mother of God and Ever-Virgin Mary is the “hope of the everlasting goods”. For all those who desire to be saved, the Mother of God will be for them the one who will carry them from the “bottom of ignorance” to the saving heavenly pastures. For this reason, daily, we address her wit

On the 3rd Salutations