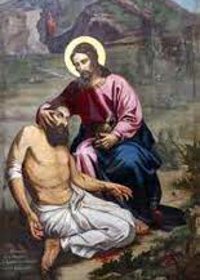 A certain man was traveling fromJerusalemto the city ofJericho. He was a peaceful and hard working man, who was struggling for his daily bread and caring about his family. On his way, he suddenly fell into the hands of thieves. What can anyone expect to follow? They stripped him of whatever he had, they mistreated him with cruelty, they wounded him and abandoned him in the midst of the desert, lying down in his own blood and half dead without any help.

In today’s Holy Gospel reading our Lord and Saviour Jesus Christ, the Son of God, gives us the example of the suffering man, who fell in the hands of evil thieves. He was stripped from every good thing that he possessed. He is the man, who departed from the sacred law of God and was abandoning the holy city ofGod,Jerusalem, in order to go to the city of sin,Jericho. Thus, he brought upon himself the sufferings which he endured.

The priest and the Levite, although, are close to the scene and they have seen what had had happened, yet, they do nothing! They do not want even to look upon the man and they leave him and depart in a hurry! They flee from the crime scene! They flee from their duty! This is what many typical religious people do today: They, who suppose to be religious, are in reality only typically. They are those people who, through religion, seek worldly glory from men, instead of seeking the glory which is offered by God. They live not according to the Orthodox Christian Faith and virtues, but in accordance of their own vain glory, self-love and self-satisfaction.

In the above cases, man renounces the good deeds, the struggles and the sacrifices which deprive him from the heavenly treasures. Whosoever renounces the needs of those who suffer, they renounce love itself. They, who renounce the love towards their fellow man – neighbor, renounce the love towards God Himself. For, God is Love and he who embraces love within his heart embraces God Himself. This is the commandment of our Lord and Saviour Jesus Christ, the Son of God, to “love one another”!

Christianity, in compare with other religions, is in reality a sacrifice. A Christian is inspired by the unique Sacrifice of our Lord offered on the Cross, and takes up many sacrifices and hard labors for the sake and love of his fellow man – his neighbor.

The Good Samaritan of today’s Parable is our Lord Jesus Christ. He came down from Heaven knowing the dangers. He knew, that the environment was full with thieves, Satan and his evil angels, and on purposely He gave up His life in order to save that which had fallen into the thieves. This is the ultimate Love which our Lord had shown to the fallen man. He, who loves, participates in the sufferings of his neighbor. The God-Man Jesus Christ loved us so much, that He came to us and became as one of us, but without sin.

He, Who is sinless, came to save His sinful creature. The Incarnated Word and Son of God took up on the Cross the sins of the whole world. Through His mercy and philanthropy, through His Blood, He took care of man’s wounds, which were caused by the various sins and sinful passions.

This divine and God-imitating Love we are all called to imitate. The instruction which our Lord gave to the Jew, “Go and you also do the same”, must be heard deeply within the soul of each and every Orthodox Christian. Do good to everyone. Become a loving person, for God is Love and the Source of Love. Christ sacrificed Himself for you, and we must sacrifice ourselves for others. Thus, the faithful become participators in the sufferings and passions of Christ.

The unfortunate which many people face today doesn’t derive from the fact that God deprives His goods from these people. The cause of unfortunate may be found in the lack of true love towards our neighbor. The lack of true love creates many social problems amongst the Nations. When righteousness is strangled; when man renounces the spiritual and moral values; when materialism cruses the image of man and transforms the field of life into a war zone, then man’s life is transformed into a desert, where the thieves are standing by in order to destroy whatever is left.

In today’s Gospel reading, our Lord and Saviour Jesus Christ, the Son of God, has shown us how to become imitators of His Divine Love and Philanthropy towards our fellow men – our neighbors. He has assured us saying, that we will be His true Disciples and pure imitators of God, if we love one another. The instruction, “Go and you also do the same”, let it become our daily practice.  This is the main and basic purpose of our life, to become Good Samaritans.

On THURSDAY, the 15th November, the period of forty (40) days of Fast for Christmas begins.

Fish is allowed until the 17th December.

The strict fast begins from the 17th-24th December.

Let us sacrifice something for God; let us deprive ourselves from all worldly pleasures, for Christ sacrificed His Life for us. Let us, through true repentance and confession, receive the New Born Child within our hearts.