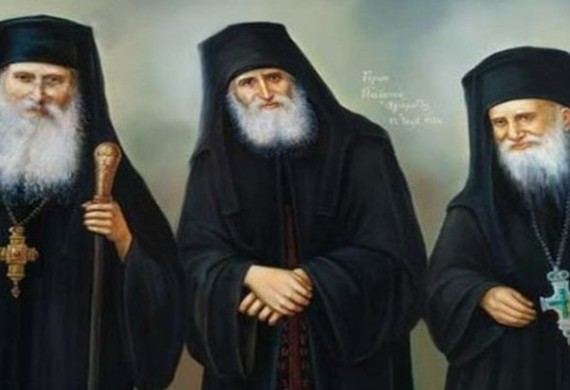 “On the Personalities of Contemporary Charismatic Elders”

Below is a transcription a friend did of a video of the Metropolitan speaking about the characters of holy elders.

Because everyone who meets another person, especially an Elder, a Saint, has a personal view and personal experience which might be different from that of the next person or a colleague. I think what characterizes holy fathers is… their great virtues, their love for God, their humility and so on, but first of all that each one retained his personality. Elder Paisios was a different kind of character from Elder Ephraim of Katounakia. So were Elder Porfyrios, Elder Sophrony, and Elder Iakovos. They weren’t the same, but each one was who he was. Cleansed from the passions and sin, but still who he was, with his own age, knowledge, background, era and all that. And then these people, in my experience, were characterized by great balance, they were very well-adjusted people, not unbalanced. They were well-adjusted and charitable. They never presented you with a dilemma; they got you out of one. Nor did they present you with a God who’d be a problem, but one who’d be the answer to all problems. That’s why people flocked to them, but they found relief. People didn’t go to them to leave troubled and weary; they left relaxed and light-hearted. They were people who knew how to have their own views, but also how to exploit the potential of each person and to know how to arrange things for each soul, what each person was capable of, what they could do from where they were. And they’d each decide in accordance with their own situation. They didn’t say: “Look, I’m a hermit and to become the way I want you you’ll have to become like me.” They came to where you were; you didn’t go to where they were.

In general, I think that as time went on, I saw that everything they did brought them to perfection in Christ, which is in no way extreme but is a mean, an endless balance, and peace. There was no sharpness about them; it was something absolutely clear, something like a calm sea that you sail over with great joy. They weren’t at all sharp, those people.

It’s not the Gospel’s fault; it’s ours for the way we live out our misery and express it to others. As a continuation of what I was saying about these holy people, they showed us exactly the image of the person who is perfect in Christ. All those people were in harmony, balanced, not at all facetious. They didn’t make you feel: “But he’s a simpleton, he’s ingenious, he’s somebody who walks on the clouds, he’s not properly grounded,” because that’s no good either. It’s not a good thing to be fatuous, nor to be ingenious, or facile or obtuse. Just as it’s not good to be pessimistic and all miserable. At the same time as they mourned human pain, the saints were joyful, very sweet people who embraced everyone. They wouldn’t put up with darkness in people’s souls. You might say that it is easy for everybody. No, it isn’t! We’ve got a long way to go to get there; it’s not easy, nor can it be feigned. You can’t say: “What was Elder Aimilianos like? I’ll imitate him.” It can’t be done. You have to tread the path that Aimilianos trod and you have to be Aimilianos to do so. Because if you are not, you’ll be a caricature, you’ll be a poor imitation.You have to find yourself. You’re not Aimilianos. You’re Adrianos, you’re Athanasios, you’re Ignatios. You’ll become who you are given the qualities you have. Let the grace of God work in your soul without preconditions.

I don’t believe that the Gospel is there to batter the human personality or tread it under foot. The Gospel saves the human person, it doesn’t trample it down. It removes the toxins and the passions and the sin, but saves the person. This is why these saints accepted others so easily. Even people who are acknowledged to be spiteful and sinful are justified by them to such an extent that you end up thinking they are saints. Elder Paisios, for example, didn’t even want to be rude about the devil himself. He didn’t call him “the devil.” Ever. He called him “the poor thing” or “the unruly one.” You’d think he was some poor little bear you could be playing with that was so unfortunate and so charming. Poor little imp. To hear others, the thrice-cursed Evil One goes to Hell to boil and to heap coals. For the Elder, he was an unfortunate little thing. Once Elder Paisios was praying and the devil stuck his tongue out at him. The Elder simply felt sorry for him. Or when we went and told him about different things that were happening on the Holy Mountain or about monks who were less than careful in their lives, he’d find ways to justify things and you’d say: “Lord have mercy, the man’s a saint.” He’d find an excuse for them and put good thoughts into your head and say good things about them. He’d say: “Look, don’t concentrate on that. The man’s got good points,so that’s the least thing compared to the many good things he’s done.” Because he himself was such a man. The way God sees people, not the way we do. And he even called tears joyful. Yes. With my limited resources, I imagine he did so because mourning and tears cleanse people and he himself was purified. He was cleansed.

I don’t know, when I went with Elder Iosif to see Elder Sophrony, I really did say to myself that he was an image of the perfect person. He seemed perfect to me. That was my own personal feeling about this man. The saints aren’t facile, nor insensitive to the pain of others. They experience the pain and they experience the whole of our apostasy from God, but because they’re now in full health, they deal with things as God does. Does God not experience our pain? Does He just look on unfeelingly? Why doesn’t He get depressed and take pills? Because He’s God! He sees things in a different way, because He has a different perspective, He functions in a different realm, where reality isn’t denied but is seen as part of the direction of divine providence. These saints say: “Look, things may be like this, but God is greater than they are. God’s not going to abandon the world and it’s not me who’s going to save it. God will save the world.” And they aren’t concerned, nor are they seized with anxiety. They have trust in God with regard to all things.

Postscript:  Met. Kallistos Ware in The Orthodox Church: “The saints, so far from displaying a drab monotony, have developed the most vivid and distinctive personalities. It is not holiness but evil which is dull” (247).

On the Personalities of Contemporary Charismatic Elders