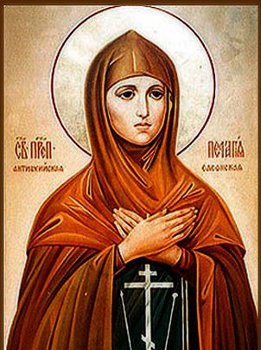 “The Harlots go into the Kingdom of God before you”

On the 8th October our Church honours the memory of two women saints. Their names are Pelagia and Taisia. St Pelagia  St Taisia. Both of them are honoured by Christ. Both of them are bearers of the Holy Spirit. Both of them are glorified by God. Let’s briefly attempt ourselves with them.
Pelagia “lived at the time of King Noumesiahos in the town of Antioch, where she occupied herself as a dancer and actress and acted as a concubine in the city, thus gathering from her evil work infinite riches” as the sacred synaxaristis informs us. She was a disgraceful vessel and an abomination of immorality and a gateless opening of Hades. A dancer, an actress, a harlot who gathered untold of riches from her filthy evil activities “a woman foul and mired”!
And Taisia “since her childhood she was turned into a worker of the devil by her own mother”. A victim of an absolutely wretched pimp mother, who procured her offspring from the tender childhood age to the abominable “life” of the brothel where “all is ruin and everything is rubbish and everybody are unburied corpses which choke the divine source of breath ” as Sikelianos would say.
Both were in the infamous cesspool of the detestable licentiousness. In the most foul and choking atmosphere of debauchery. In the dark and moonless night of the sinful ergs. In the most degrading slavery of the filthy passions of the flesh. In the most wretched remoteness of what is called non-christian, but simply of human life.
Where are you lamenting Jeremiah, to cry about such corruption of the image of God? Who would give you “water and springs of tears” to lament the ocean of our sins, the abyss of our wretchedness? Man “once a king”, “who is a little lower than the angels”, the one “crowned with glory and honour” by the Creator, the one “bought at a price” by the God-Man, a slave of the worst bondage. A very vile slave of the most foul devil and his obscene daughter, the “wild” sin.
But blessed is God “who will have all men to be saved and to come unto the knowledge of the truth (1 Timothy 2:4). Glory to God who transforms the wolf to a sheep and the crow to a white pigeon. Who extracts from the bitter sweet and from the black white. Who takes on Himself our sin and cleanses us from every filth. Who mortifies our death and receives us with the light and dew of the Resurrection.
“She, who was formerly a prodigal, showed herself suddenly wise and she loathed her shameful sinful deeds and carnal pleasures”.
A holy bishop, imitator of the Good Shepherd and searcher for the lost, Nonos, goes near Pelagia. He does not reprove her harshly. He gives her a helping hand to come out of the mud to come above the mire, to breathe the vital oxygen of Christ.
– Come Pelagia. You have laboured the works of the darkness long enough. You have laboured sin long enough. Shake off the dust of your licentiousness. Raise your eyes my daughter and see on the cross Him, who loved you truly. The love for you raised Him on this wood of disgrace. His mad eros for you. He is not like the other Lovers who paid for your caresses and shattered like beasts and trampled whatever beautiful and Holy was placed in you “He who in the beginning created man in his image and likeness”. His is the beautiful in form bridegroom of every human soul. His is the only all pure, immaculate and virgin in the full sense of the word. And he is burning with your desire, my desire, and the desires of every person. He is always awake waiting for us. He does not rest unless we return to Him. He will accept you. Do not doubt. He hates sin. Not you. He detests prostitution, but he receives the prostitute. He does not condemn.
The chains break. The heart, pierced by the arrow of the crucified love, softens. The mind is pulled together the soul recovers, the Godly grief appears, the grace brightens the repentance is realised. She is baptized. She replaces the silk clothes she wears with clothes made of bristles. She leaves for the mount of olives, she confines herself in a humble cell – workshop of virtue and university of repentance for the rest of her life – incessant prayer, speechless sighs, cries from the depths of her soul, ever flowing tears trickling from the heart, lifelong ascetic struggles. “Do not repel me, the harlot, You who was born of a Virgin. You the joy of angels, disregard not my tears but Lord, receive me in my penitence, whom, through Your great mercy, as a sinner You did not cast out”.
Pelagia who became the whore – Pelagia, become Pelagia again. And from Pelagia she becomes blessed Pelagia, Saint Pelagia. From the natural she fell to the unnatural. From the unnatural she returned by repentance to the natural. And from the natural the Grace of God “that saves all people” elevated her to supernatural. This is the change brought about by the Right Hand of the Highest.

But also Taisia “she was pursued eagerly by Pafnoutios the Sidonian and she received the perfect information that there is repentance”, after sharing out her wealth to the poor, she locked herself in an ascetic cell and crying and sighing from the depths of her hearts she was saying, “my Creator have mercy on me!”
– Is there repentance?
– There is repentance Taisia.
– And for me the desperate in life?
– And for you most certainly Taisia.
– Does He who is beyond all purity accept me the harlot?
– He accepts you Taisia. For you He became human. For you He was crucified. For you He died and was buried. For you He rose form the dead. For you He established the Church. For you are His churches. For you are the church bells. For you are His philanthropic mysteries. For you is everything.
Receive the sources of my tears You who gathers into the clouds the water of the sea; in your ineffable condensation bend down Yourself to me and to the lamentations of my heart. You who inclines the Heavens by your unutterable void. My Saviour and soul saver who can trace out the multitude of my sins and the abysses of Your judgement who will discover them? Do not disregard me Your servant, You whose mercy is boundless.
He accepted her. He did not ignore her. “For He came to save the harlot”. His kindness did not destroy her. He saved her from the storm of sin. He dissolved her debt. He restored “the beauty of the soul”. He dressed her with a snow white “wedding dress” and only after these years of true repentance – sufficient for the abyss of sins of a whole life time – He admitted her in the divine Wedding Chamber of His glory “where there is a pure sound of people celebrating and calling out incessantly Lord glory to You”.
“Truly, I say unto you that the publicans and the harlots will go into the Kingdom of God before you” (Matthew 21:31). “Slothfulness is terrible. Repentance is great”.
The Pauline verse, “where sin abounded grace did much more abound”, happened in this instance.
Who can say that there is no salvation for him? Who can lawfully be in despair? He who accepted, purified, justified, sanctified and deified the former harlots and already very dignified Pelagia and Taisia cares for us also! “Jesus Christ the same yesterday and today, and for ever (Hebrews 13:8).