/ Orthodoxy around the world / Dumitru Uţă. A saint of the Romanian prisons
<--Back

Dumitru Uţă. A saint of the Romanian prisons 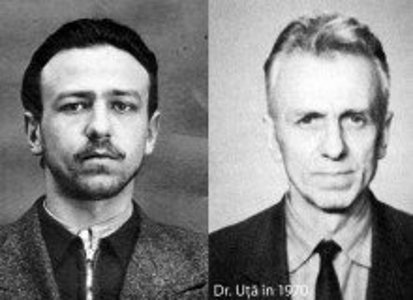 He was one of the saints of the Romanian prisons, a true silver-less doctor, who spent 23 years in the Aiud prison, a man with a deep faith in God and a great devotion for his neighbour.

After healing the second in command of the Aiud prison, Mares, from typhus, the doctor became the most respected man in the prison, even by the leadership. He was allowed to get out anytime in order to find medical supplies and he was returning each time loaded, with full sacks. Everybody was asking for his help, guards and office workers were bringing him frequently to their homes for various health problems of relatives and friends.

This way he knew Veronica, a guardian’s daughter, whom he taught English. Veronica was so impressed by this man that she waited on him for twenty years to be released. They married in 1967. It seems that, being fulfilled on the spiritual side, doctor Uta was no longer interested in marriage. He did this nevertheless in order to repay Veronica for her patience and love. He became, as she would later recall, a true “spiritual father”.

While in the prison, doctor Uta showed an amazing work energy, even forgetting to eat, so many times close friends would care to feed him. He was fasting piously and would give others the little piece of meat which happened to come most of the time on Wednesdays and Fridays.

At some point the idea of releasing him for good behaviour and for medical merits was raised. But doctor Uta said “where could I be of more use, here or outside?”… and he chose to stay.

He hand-crafted himself all sorts of surgery instruments, forcepses, surgical knifes, which which he would make extremely successful surgical interventions. It even happened that medical students from Bucharest came to Aiud to learn from him the medical practice.

After he was released, he was given a medical position in a small village. There, you would find him all day long at the “hospital”, which he supplied with tools. In little time he became the most beloved man of all the neighbouring villages. For his work he would not receive any payment. People would have loved to thank him somehow, to show their gratitude, only that their doctor would not eat almost anything but fruits. But he would not receive even those… Finally, the village folk found a discrete way of giving him something, they would empty sacks of fruits in his garden unnoticed. And thus, you could see all summer and fall, just like in fairy tales, mounds of fruits under the trees in Dr. Uta’s little garden.

The Securitate got alarmed by his earned popularity. It was decided from the high places that the doctor should be given a position in Bucharest, so his fame would be lost and forgotten. The doctor asked for Hospital No. 9, the neurological section. He was not allowed to take his final exams and was kept all the time on a rather lowly position. He came through to the top anyway through his great devotion and competence, so that everybody called him “the great doctor”. Thus did he finish his course, in humility, in prayer and in the service of his neighbour.

Through the example of his own life he left us this great teaching as inheritance: to do everything possible for our neighbour, just like for Christ.

Dumitru Uţă. A saint of the Romanian prisons