/ Catechisms and articles / Who is the Theologian?
<--Back

Who is the Theologian?

To answer this challenging and hard question, I would like to tell you first the following story. Three students from the Theological School of Thessaloniki visited Mount Athos, seeking to see a monk. After welcoming them, the monk 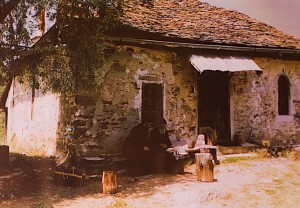 asked them: “Who are you?” And they replied: “We are theologians.” Astonished, he asked them again: ” I know that there are three Theologians in the Church. Do we have now six?”

So starting from this story, we ask, who is the theologian? What is his role today? And why is there a need for theologians in our church?

Hence, theology leads us to know about divine things by two means. First, by gathering knowledge, and second -which is the purpose of the first- by experiencing the divine power and grace. And this is then the perfect knowledge of the divine truth.

This word (theology) was used before Christianity. For Plato, this word meant all the science that gives a clear image of God in His great city. After Plato, this word was extensively used in Philosophy, and some poets like Homer were called theologians because they composed poetry about God.

And it is clear that, up to the period of great apologists in Christianity, the church remained very reserved and careful in using this and another word, “Philosophy.” For Justin Martyr and Athenagoras, the word was used to indicate merely its unique meaning in the Christian vocabulary. Afterwards, with the Alexandrians, the use of both words became popular in Christianity.

So the word “theology” is not just restricted by a certain scientific methodology of divine knowledge, even though it was used sometimes to mean this. Theology, however, is much broader. It can be defined as the means of approaching and uniting with God. That’s why many fathers of the Christian literature defined theology as the spiritual experience. This reminds us for example of Gregory of Nyssa who said, “the theologian is the man of prayer.”

Evagrius of Pontus defines Christianity as being “the doctrine and faith in our Lord Jesus Christ, divided into three portions. First, the practical portion; second, the natural portion; and third, the theological way.” By the practical, he means the ascetical practice that purifies the soul. By the natural, the scientific method that purifies the mind. By the theological, the real knowledge, or the truth of things.

The troparion of the righteous saints talk clearly about divine knowledge and divine contemplation. For example: ” …through your fasts, vigils, and prayers, you received heavenly gifts.”

This is the practical, ascetical, way that leads us to receive the grace that makes man see and perceive God and contemplate Him, as we sing in this other Troparion: “You have found by your work a way to contemplating God (theoria)…”

Fasts do not just mean the exterior deprivation and detachment. It rather is the hard work that purifies the body, making it a vessel of the spirit. And vigils points to the contemplation of Divine Word and the concentration of the mind (nous) in the divine world. Finally, prayers aim at directing the heart to long for God.

If this is theology, so who are we, the “theologians”, ought to be? If we say that the science of theology is simply the exercise of uniting ourselves to God, and its sciences are the various ways of doing that, than the theologian is the one who is united with God, or rather is the one who is trained in this science.

Uniting ourselves with God is another word that points to deification, which is the purpose of human creation. To be deified is the natural result and fruit of the human creation in the image and likeness of God. The process of deification is the activity of man always longing to be in the image of God.

After the fall and the failure of man to turn to God, God Himself turned to man. So instead of the deification of Adam, there was the Incarnation of Christ.

Christ, the “God-Man,” is not just an example for us, but also He is the beginning. His life, resurrection, ascension, etc., are not His own personal matters, but they announce this new world and creation. Christ “God-Man” proclaims the Church to be the “haven” of the world, or the new world.

So who is the theologian in all this matter? He is the priest that transforms the world into a church. In other words, he is the artist of the art of christianizing the world. The theologian is a skilled man whose skill is to form God’s Christians.

Theologians are people who want to give the Incarnation of Christ , the Son of God, its value and worth. This means to make a progeny to God in a world that sometimes remembers, and other times forget God.

The theologian is not the teacher of a religion, even if he teaches it.

The image of the ideal theologian is the Virgin Mary, and after her, the saints. The Damascene was the lyre on which the Spirit played divine melodies. These melodies incarnate the Word of God in man, moving him to live the Christian life in our world.

As theologians, we have to carry out this noble mission in a world that deforms man, turning him away from God, rather than christianizing him.

It may be that the origin of man is an ape, and it may not be so, but both matters are the same. What is important for us is that the destiny of man does not lead him to become an ape.

The past, we leave it to science to discover it. The future, we take responsibility of forming it. Even though the responsibility is great, we remember the words of the Shepherd, “Do not fear, o little flock.”

For this mission, we will carry tomorrow the Holy Chalice, as a burning bush that does not burn. For this, we will stand many times praying at the holy altar facing the divine light and glory, naked from the garment of worthiness, but rather covered with the garment of humility, hoping that the grace encompasses us and the glory clothes us.

We are the friends of angels, harmonizing with the heavenly hosts. Put it simply, we are the pioneers of the temple, the readers of the Book and books, the lovers of beautiful melodies, the seekers of true knowledge, and the attentive listeners to the Divine Word.

Facing this truth, negligence on behalf of theologians would be considered a great crime towards this call, our call to the fellowship with God and to evangelization. Indifference is a great dissipation. Hesitation is a great waste and a loss. And loving the base things of this world is adultery, and the insensibleness towards this responsibility is a quiet suicide.

Having this responsibility, it becomes necessary to struggle spiritually by vigils, fasts and prayers, by hard work and longing to God. It is the way to bring upon us the divine grace and the divine manna that deifies and transforms us.

At the end, the work of the theologian is the “transfiguration,” that is the transfiguration of the (God-Man) in every man. It is to make the human being deified by grace.

So let us theologians search every moment for our means, and for the grace that will work with us. Let’s knock and he who is standing at the door will open.

The theologian is another Baptist and a forerunner of Christ, who is a lamp of light and a morning star for every human soul. In fact, the theologian is a mirror reflecting the divine light. If he has not received the light, he cannot transmit this light.

The theologian is the one who draws from lines and words and squeezes out from pages and books the water that the Samaritan drunk from, so that rivers of living water will gush forth from him to his brothers and sisters.

The theologian is the son of the temple and of the worshiping world. In his worship, he enters into a “holy sabbatical,” where God rests.

The theologian is bron on the eighth day. He does not want to escape this life, but he desires to reveal the time of the kingdom in this earthly time.

This is the time of struggle. This is a blessed time. Blessed is he who comes in the name of the Lord.

Who is the Theologian?