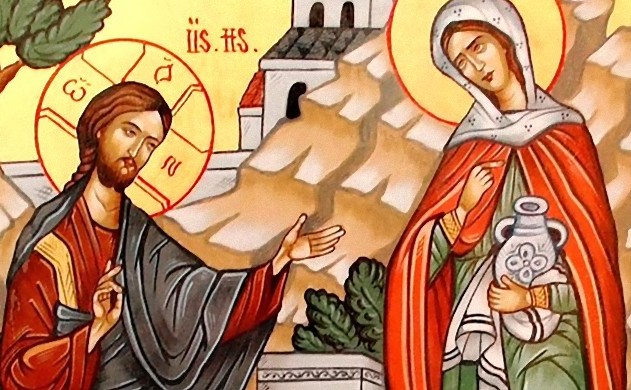 Our Lord and Saviour Jesus Christ visited a city of Samaria called Sychar (Shechem).  Outside of Sychar He waited at Jacob’s Well, as the Apostels went into the city to buy some food for their journey.  In those days the Jews never associated in any way with Samaritans.  They saw the Samaritans as an impure and sinful nation, and a great hostility was cultivated against them.  The Jews were never suposed to pass by the land of Samaria or even to mention the word Samaria, otherwise they were considered unclean before God.  The Samaritans were a mixed race and traditional enemies of the Jews.  Although they worshiped the God of Israel and were awaiting a redeemer, they accepted only the first five books of the Old Testament as their Scriptures.  They had built their own temple on Mt. Gerizim, which the Jews destroyed in l28 BC.  For this reason Christ our God used the example of the Good Samaritan to teach and to prove  that all men are accepted in God’s Kingdom.

Jesus was sitting next to Jacob’s Well.  This well symbolized the life given by God, especially the life of blessedness.  A Samaritan woman came to draw water from the well.  Jesus without any thaught said to her: “Give me to drink”.  God who created the waters and gave it to man; He who seperated by water the dry land and made the islands appear; He who makes the rain to fall upon the earth; He who decorates the surface of the earth with rivers and springs up fountains of water, asks from His own creation to give Him water.  He did not only ask from a Samaritan woman to give Him water to drink, but He asks from a sinful woman to quench his thirst.

The Holy God meets with the sinful woman.  The Word of God talks with the logical image of His Divine Image and reveals to her the divine truths concerning how man should worship God.  It is not the places, neither in Jerusalem, neither on the mountains of Sychar where the True God is to be worshiped, but in the hearts of all those who worship God in “spirit and in truth” (John 4:23).  For “God that made the world and all things therein, seeing that he is Lord of heaven and earth, dwelleth not in temples made with hands; neither is worshipped with men’s hands, as though he needed any thing, seeing he giveth to all life, and breath, and all things;  … For in him we live, and move, and have our being; … Forasmuch then we are the offspring of God, we ought not to think that the Godhead is like unto gold, or silver, or stone, graven by art and man’s device” (Acts l7: 24-25, 28, 29).  Man is called to worship the True God in the spirit of His Truth and not in any other worldly truths, which are the result of philosophy and man’s logical efforts of research.

God is not an object to be examined by man. He reveals Himself to man in a way which man cannot understand.  When man experiences God’s revelation, then he experiences the warmth of God’s Love.  He sees and loves God through the love of his neighbour.  He worships God through true sacrifice, crucifying daily on the cross his sinful desires and passions.  He imitates God’s Holiness by sanctifying his soul and body, his thoughts and feelings, through the Holy Sacraments of the Church, leading a sacramential life in Christ.  This means, that man should live in Christ, according to Christ and for Christ.  “In Christ” means that man must become a member of Christ’s Holy Church.  “According to Christ” means that man must live a Christlike life cultivating a virtuous life.  “For Christ” means that whatever man does he does it for Christ’s glory and not for any other reason. Otherwise he is not following  God’s Truth. Especially, if he follows his own way of life and not that which our Lord and Saviour instructed us.  For Christ proclaims and says: “I am the Life, the Way and Light” of the world.  We must never forget that no one can go to the Father except through the Son.

It is for this reason why our Lord and Saviour wishes to meet man on a personal level.  Man, because of sin, cannot approach God.  God on the other hand is always there for everyone.  He is standing every day, every moment and every second in front of our own hearts and knocks on the door of our hearts, waiting for us to open our hearts to Him.  He is waiting next to the well of our hearts, empty of God’s Grace, and wishes to fill them up with the divine water, which springs from the Holy Spirit.  He wishes to quench our thirst with the eternal water of His Heavenly Teachings.  He wishes to come and speak to you at a personal level and tell you, how much He truely loves you and wants you to rest from all worldly anxieties.

The Samaritan Woman, before she met Christ, she led a sinful life and became an instrument of sin.  When she experienced God’s revelation, she then changed her whole life.  From an instrument of sin, she became an instrument of spreading God’s Word.  From a slave of sinful sexual desires, she renounced herself and desired only one thing in life: how to please God and to fulfil God’s Divine Commandments.  Being a person who separated people from their families, she now becomes the reason for men to join with God.

In today’s Gospel the Samaritan Women approached Christ our God and found the true meaning of life.  Each and everyone of us must approach in a similar way Christ in order to find the meaning of life within our hearts.

Man away from God and His Commandments is misled by sin, which offers worldly pleasures, but not the true goal of  life.  Man is created in the “image and likeness of God”.  He is called to become holy, as God the Father is Holy.  God offered to man, through the death of His Only begotten Son, the true and only Life.  Through Christ’s Crucifiction and Resurrection man becomes a member of Christ Body, a brother and inheritor of the Heavenly kingdom.

Today, we are called to manifest Christ’s Life through our own lives.  We are called to reveal the Resurrected Christ through our own bodies, and yet, how sad it is that we still allow matterial matters to become obstacles for our spiritual growth.  Although we seek God, we do not want to meet with God, because we know, that we must forgive those who harmed us; we must make up with those who done wrong or said something against us.  Although we thirst for spiritual life, we remain under the shadow of hatred.  Although everyone knows that all things here on earth are nothing more than vanity, they prefer to drag their own brothers and sisters to court just to satisfy their own pride or to seek revenge.

But, my beloved friends, as Orthodox Christians we should not act in such away.  The world will pass and all its desires.  At the end we take nothing with us.  We must never forget, that we will all stand before the fearsome  Seat of Christ our God and will give an account for all our deeds.  To stand on that Day, let us prepare ourselves from this period of time.  Through repentance let us meet with Christ and let Him take over our lives.  Let us free ourselves, through Christ’s Divine Grace, from all sinful desires and passions.  Love one another as He did love us, for only in such a way can one be Christ’s disciple.