/ Catechisms and articles / The Blind Man
<--Back 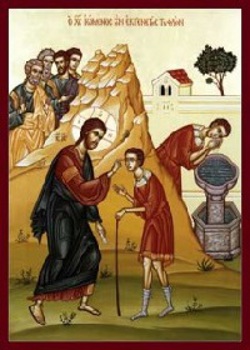 Christ is risen! He is truly risen.

In today’s Holy Gospel, as our Lord and Saviour Jesus Christ left the temple of Jerusalem, leaving behind the Jews who wanted to stone Him (John 8:59), He passed by a young “man who was blind from birth” (John 9:l).

It is very difficult for anyone to describe the world of a blind man. What can we say? What words can we find to comfort him? It is easy for us to find and say nice words, but have we actually considered the unlimited darkness within a blind man’s life?

The young man was in total darkness from his birth. His only and inseparable companion was the unlimited darkness, and yet his heart was full of God’s Grace and love. One can see this, because, not only was he sitting next to the temple, begging for mercy (John 9:8), but he was also faithful and knew the word of God (John 9:3l).

Our Lord and Saviour Jesus Christ, who knows the deepest thoughts of man, passing by the young man saw his heart and granted that which he always prayed for. The blind man, although blind bodily, was not blind in his heart and spirit. In the loneliness of darkness, he was never alone, because his heart was with God. The event that Christ made him well without asking him, if he believes or if he wishes to become well, proves that the young man was a godly man.

In most of the miracles which our Lord made well the ill, He requires faith. In this case the Son of God without any delay, without any questions, without any hesitation grants His divine heeling Grace. God, who formed man of the dust of the earth and gave him eternal soul, now makes clay and creates new eyes and gives sight to the young man. “Go, He says, wash in the pool of Siloam” (John 9:7) and the young man at once, without any doubt “he went and washed, and came back seeing” (John 9:7).

He never questioned, ‘who are you, who commands me to go and wash’? He did not placed doubts in his heart. He stood before his Creator with faith and deep hope, that the One who now places clay on his eyes is the God who created man. He is the God, who through His divine command brought all things from nothingness into being. In his heart he was convinced that Christ is the Son of God. He believed in Christ before he ever had the chance to meet or see Him. In the darkness of the young man’s illness God came to heal His creation and to grant the light not only of his eyes, but also the Light of His divine and heavenly truths.

Jesus Christ opened the eyes of the blind man. He created new eyes and the man, who was in darkness from his birth, was able to see the light of this world. When he washed in the pool of Siloam and became well, he could not express his feelings. He was completely lost. Because, up to that moment he was finding his way by groping and feeling the walls of each house. When he saw, he just could not find his way in the city. He just admired everything. We can imagine how loud he shouted: ‘I can see. I can see’!

But my beloved friends, the blindness of the young man cannot be compared to the spiritual blindness which covers the eyes of all those who live astray from God’s Will. God created man to be the King of all creation. Man is the only logical creature which was made in the “image and likeness of God” and for this reason “God so loved the world that He gave His only begotten Son, that whoever believes in Him should not perish but have everlasting life” (John 3:l6). Christ is the Light of the world. He is the one who grants, through His divine Grace, enlighten to man’s soul and spirit. Through this heavenly illumination man is able to understand the true knowledge of God.

When man is under the slavery of sin, he cannot see. He becomes blind in heart. He thoughts are darkened. His conscience is enslaved to sinful desires and passions. Under this sinful state, man lives in spiritual darkness which in fact is worse than to be born blind.

One may ask the question: What is sin? Sin is every action which separates man from God. Man sins, when he goes contrary to God’s Commandments. Every thought, word or deed which is contrary to God’s Will is sinful, because on the one hand it deprives man from God’s Grace, whereas on the other hand it disfigures man’s personality and whole life for which God created him. Sin is in reality the death of the soul, because it estranges the Holy Spirit, which is the source of Life. God cannot rest where sin prevails.

The Holy Spirit enlightens man to avoid sin, but it depends on man’s own free will, if he wishes to follow the path of a virtuous life shown by God. With Holy Baptism man is cleansed from the Original Sin and from all personal sins. During the Baptismal service the Church prays to the Holy Spirit for Him to enlighten the newly baptized.

In our daily lives we must turn to our Lord and Saviour Jesus Christ and ask Him to give us our spiritual sight. We must kneel in front of His Divine presence and ask Him to clear our hearts from the dark and black clouds of the sinful desires and the passions of the flesh and to clean our whole existence from the dirt of sin.

Only when man approaches Christ within the true way of a virtuous life, can he become free from sin. Christ taught us saying: “He who commits sin is a slave to sin”. True freedom is found only in the life of Christ and this Way of Life is expressed within the life of the Church. To be free means, that one received his true spiritual health through Christ. Spiritual health means, that man can see with the eyes of his eternal soul the reason of his spiritual blindness. Let us recall in our minds, that when St. Paul was baptized, “immediately there fell from his eyes something like scales, and he received his sight at once” (Act 9:l8).

Τoday, our Lord and Saviour Jesus Christ, the Son of God, is approaching each and every one of us. He is next to you and wishes to grant your spiritual sight. He desires to enlighten your soul with the knowledge of His Truth. He wants to heal you from all your infirmities. He wishes to find you and be with you.

Let us approach Him, He who sacrificed His life for our salvation. Let us come close to Him, He who came close to us. Let us open our eyes to see His Light, for He is the Light of this world. Let us become true disciples of His Divine Love by following His Commandments. Let us become His followers by submitting our will to his Divine Will. If we truly love Christ, let us practice His Commandments, for He said, “if you love me practice my commandments”. He is the Way and the Resurrection of our existence.

By His Eminence Panteleimon Metropolitan of Antinoes

Sunday of the Blind Man