/ Catechisms and articles / The healing of the two demonic. 5th Sunday of St. Matthew
<--Back

The healing of the two demonic. 5th Sunday of St. Matthew 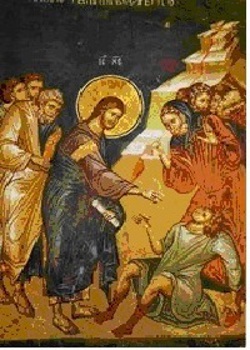 The event of the healing of the two demonic, who lived in the cemetery, outside of the village of Gadarenon, is narrated by St. Matthew the Evangelist.  These were a threat to the passing travelers. As they saw Christ, they cried out: “What do you have with us, Jesus, Son of God? You have come here before the time to make us suffer?” These words were said not by the men, but by the demons, and they begged Christ, if He will cast them out, to allow them to enter into the herb of swine which were near by.  “Go”, Jesus says, and immediately the demons left the two men and went into the swine, and the whole herb felt into the sea and drowned. Then, those who saw, returned to the village and informed what took place. All the people of that village went out and ask Christ to depart from their region.

This Gospel reading has two paradox and contrary events. On the one hand, the demons recognize the divinity of Jesus Christ and they request to show mercy, whereas, on the other hand, the villagers refuge to accept Him. The demons could not acknowledge that they had before them the Son and Word of God, thus they beseech Him not to send them into the eternal darkness, but to allow them to enter into the herb of swine. They beseech Him because they have no authority over Creation, neither any authority over men, unless God Himself allows them.  Thus, Christ allows them, in order to teach everyone that were the demons act, the results are catastrophic and mortal and for the soul and for the body.

On the other hand, although the divinity of Jesus was revealed, although the miracle of the healing of the demoniacs took place, the people instead of accepting Christ, as the Samaritans have done, they ask Him to depart from their region. Instead of asking to assist them in healing all their ill, they ask Him to depart immediately. Their reaction can only be interpreted as spiritual blindness. Although they before them the miracle, they are unable to believe in Christ. They were more concern for the lost of herb of swine rather than to repent. They proved that although they themselves were not possessed by demons, yet, they take side with the acts of darkness. They partake in sin and they do not desire their spiritual healing, nor do they change their sinful way of life. For, if they had accepted Christ in their village, they would had accepted Him into their hearts, and consequently they had to repent and follow the Teachings of His Gospel.

The example of the Gadarenees should not surprise us. Frequently we hear that people around us say: “If I don’t see a miracle, I will not believe”! They seek an excuse for their disbelief. Although a miracle requires faith, as we see this in all Christ’s miracles, we have circumstances, in which it is realized in order to strengthen their faith. Unfortunately, although a miracle takes place in their lives, they still remain unfaithful, because they do not wish to change their sinful way of life. For this reason, because they cannot find any other excuse, they renounce Christ and they exile Him from their lives.

But, in our daily Christian life, we create in our personal environment reasons to prevent Christ to enter into our hearts, our work, our families and our neighbors.  This is one of the great temptation of our times, to consider our religious education ending in Church, or when we stop praying. And as other Gadareneens, we act as though God is absent!

Let us present ourselves before God and glorify Him by receiving Him with all our hearts, and no to imitate the unfaithful villagers of today’s Gospel.

The healing of the two demonic. 5th Sunday of St. Matthew