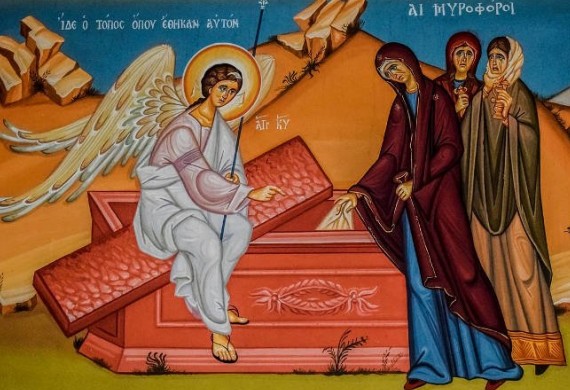 And when the Sabbath was past, Mary Magdalene and Mary the mother of James, and Salome, had bought sweet spices so that they might come and anoint him.

Today’s Sunday is called the Sunday of the Myrrh-Bearing Women. The Myrrh-Bearers are those women who, in spite of the fear spread by the enemies of Christ, dared to go to Golgotha before Sunday’s dawning, to anoint Christ’s body with myrrh. Because of their ardent love and faith, they were the first to hear the glad news of Christ’s resurrection and to become the evangelists to the disciples who were terrified and hiding at a friend’s house. The disciples were timid! The myrrh-bearing women were brave. In that situation, the women proved to be incomparably greater than the men.

God, as we all know, created Adam as the first human being. He created him “according to His image and likeness” and put him in paradise. But the all-wise and all-kind God didn’t want to leave Adam that way. When he slept, God took one of his ribs and fashioned the first woman, Eve. When Adam awoke, he was amazed. Of all creation Eve appeared in Adam’s eyes to be the most beautiful.

God fashioned man and woman in such a way that the one fulfilled what was lacking in the other. That which man had, the woman did not have; that which the woman had, the man did not have. A man has certain abilities and talents, and a woman has others. With their union, the one complete the other, and a human being is brought to perfection.

There is a story that when a certain young man married, he was filled with such joy and happiness that he wrote to his teacher, the famous Koraes, and told him: “Teacher, I am no longer alone. I married and became two”. Koraes supposedly answered him: “No, my boy, you didn’t become two, you became whole”.

A man and a woman are like two half people who, when they are joined, form a whole person; they are like two hemispheres which, when joined, make a whole sphere. Man is more mind and woman is more heart, and in that holy union of marriage they complement each other.

It is impossible for a viable community made up only of men to exist, just as it is impossible for a community made up of only women. The attraction God planted in the hearts of men and women is what brings the two races close to each other; it joins them, and from that joining, the new generation results. Only in exceptional cases can men or women who are overwhelmed by divine love conquer, by the grace of God, the natural attraction of man toward woman and woman toward man; only a few can succeed in living a kind of angelic life in a human body and present an image of that heavenly life we anticipate in which the genders will cease and all will live like angels in the Kingdom of Heaven. For these people, the hymn might be said: “To the hermits life is blessed, because it is possessed by divine love”.

Man and woman. Both are exceptional creations of God, with abilities and gifts to fulfill the high mission given to them by God – that is, to continue life by child-bearing. God elevates man and woman and makes them co-workers in the making of new people.

God created one man and one woman. This means that God is against polygamy of man and woman. If God wanted them to have many wives, as the Koran teaches and the flesh-worshipers of our age practice – even though they are called Christians – God would have had to fashion one man and many women. If God wanted woman to have many husbands, then He would have made few women and many men.

Unfortunately, though Holy Writ orders these rules on marriage, the opposite takes place in societies that are governed by the Spirit of God. At one time man became woman’s tyrant, and woman found herself in a miserable condition; she was treated like an animal and even worse than an animal. At other times, the woman was the tyrant, and under her tyranny, men became degenerated beings, slaves and pack animals, led around by these corrupted women.

The Bible condemns both extremes. The Bible wants man to be an affectionate husband and father, who behaves with love and courtesy toward his wife and children, not as a dictator. The Bible also wants the woman to be at the height of her mission, a precious companion to her husband, a loving mother, the queen of her house who is dedicated to bringing up her children. The Bible wants the woman to be a myrrh-bearer, like the myrrh-bearers of today’s scripture reading. A woman like that can offer a great service to the world. Such a woman surpasses man in heroic achievements of faith and virtue. A woman like that appears to the world like an angel who spread the myrrh of love.

Myrrh-bearing women! How few of them there are in this contemporary society of ours, which is rotted by unbelief and corruption. If only those few and pious women who hear or read this homily could be all women.

This chapter was taken from the book

“DROPS FROM THE LIVING WATER”

Sunday of the Myrrh-Bearing Women