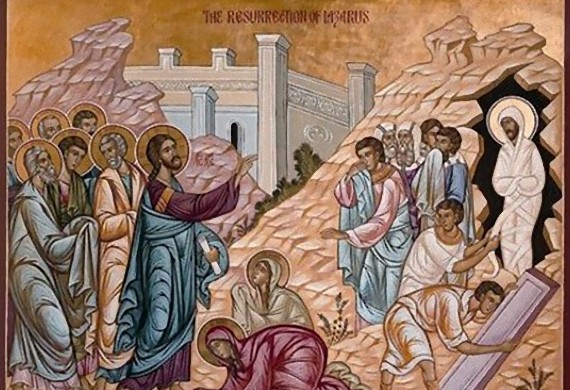 Lazaru’s Saturday marks the end of the second period of the Triodion and, while it marks a joyous interval of one day, the Palm Sunday, we come to the most holy days of the ecclesiastical year, the Holy Week.

Lazaru’s resurrection is one of the hopeful pronouncement of so much that will happen one week later, when the “Life of all”, Christ, the dawn of “The first day of the week”, being a Sunday, trampling down death and granting life everlasting, no longer to one person but to the whole of humanity. On the other hand the triumphant entrance of Jesus to Jerusalem, which is celebrated on Palm Sunday, is a panegyric proclamation from the mouths of the babes and sucklings, and of the souls of the God-lovers, because He, Who will be taken like a lamb to the slaughter under the curses of the people of darkness, is the One who comes in the name of the Lord, “the King of Israel”. Not only the old Israel, as ironically was written on the Cross by Pilate but also, the new one, which is the Church! He is the Lord of the whole world, visible and invisible, earthly and heavenly. The Lord of the living and of the dead, Whom “death does not conquer” even though we saw Him hanging on the Cross. Even though we saw Him dead, He will be “most life-giving dead”, Who in three days, by His resurrection, will remove the poisonous sting of death, will deprive Hades of victory, will enlighten the world of the nether regions and will resurrect Adam “with his whole race”, granting inalienable life to His creatures.

Having, therefore, on hand those joyous facts, firm hopes which in no way can be contradicted, we are called to follow step by step the painful path of our Lord till His Passion, to His Cross and to His death, like the Church, day after day of the Holy Week guides us. Because without the Good Friday there cannot be Easter. Resurrection without prior death is not possible! Empty Cave without the Cross is something inconceivable.

Jesus Christ suffered before He was glorified. He suffered in reality, Not imaginable or assumed. Neither did He suffer simply skin deep, far from it!…

“Every part of His holy flesh suffered the disgrace for us”,

as states a Troparion of the Praises of Good Friday.

His head was injured by the thorny crown. His face was spat upon. His jaws received blows. His mouth the unbearable taste of vinegar mingled with gall. His ears suffered the disgraceful blasphemies. His back the whipping. His hand was disgraced with the mocking reed. His whole body was stretched on the Cross. His joints were pierced with the nails. His side was pierced with the spear. His human dignity was degraded with the mocking red mantle, which like another “straight jacket” they put on Him. His heart was injured by their ungratefulness. Not just by the crowd – “My people, what have I done to you, and what have you given me in return!” – but even of those much closer to Him. Judas who betrayed Him. Peter who denied Him. And the other Disciples (save John) who abandoned Him during His most painful hour on the Cross. And finally the horrible and dreadful death of His body, which sealed the Suffering of His body and the Trying of the soul of “the Son of Man”.

All these did take place. They were undeniable facts, most bitter and most horrible. But they had to take place, according the very ancient intention of the Divine Love. Only after these and the suffering of the Chief of our salvation took place, began, through the Resurrection, the never ending Day of the true Light and the actual Life, for all those who wished to make the offered salvation from God, their own.

If we belong to these who wish to receive the salvation offered by the love of God, then we must be determined to receive the painful road of suffering. We must march together with Jesus who is hurrying to His Suffering for us. To crucify the unruly cavorting and impure desires of our flesh. To bury our blameful passions indeed those hedonistic tendencies, which are the most dangerous means of destruction. Parallel to this we must be intellectually awaiting by the side of the Cross of our Lord, together with the Theotokos, the Beloved John and the Myrrh-bearing women, as His most grateful children. We must declare together with the pious Centurion that “Truly this man was the Son of God!” and say together with the grateful robber from the depth of our soul: “Remember me, Lord, when You come in Your Kingdom”! Also together with Joseph and Nicodemus we must offer to the Life-giving dead body of our Lord the myrrh of our gratefulness and the aloe of our worshiping tears, to be with the Myrrh-bearing women “very early in the morning” to run to the Grave of Life to meet our Master and Lord, the triumphant Victor of death, offering Him instead of myrrh, a hymn and Doxology befitting God, having previously cleansed our internal world with repentance, to hear from His most holy lips the: “Rejoice”! The most sweet greeting that a human ear could ever receive! So much more when this is coming from the Theanthropic mouth of Jesus, it is not a simple greeting and a wish, but a tangible gift, blessing and grace…

Our humble wish and prayer is, at least for all those who read these lines and those who would have the desire to cross the entrance of the church these holy days, is that they be proven worthy, indeed, all of us to be proven worthy to live the suffering of the Passion, to accept the grace of the Cross, to taste the joy of the Resurrection and to walk as enlightened children of the Church ready to receive the blessed hope of Christ’s salvation.