/ Catechisms and articles / Sunday of the Publican and the Pharisee
<--Back

Sunday of the Publican and the Pharisee 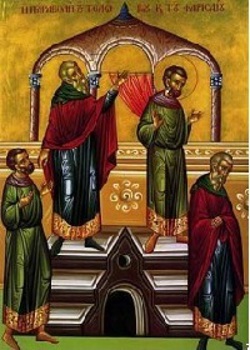 It was very characteristic of our Lord Jesus Christ that in order to teach the Divine Truth, He used examples taken from the daily life of His times. In this way He was able to help those who believed in Him to apply the Divine Truth in their own lives.

In the Parable of today’s Gospel, our Lord showed us two different types of men, who both went up to the Temple to pray. He also mentioned a very significant point, their different religious and social class. The first was a Pharisee and the second a Publican.

Now, amongst the Jews of the time, there were different religious parties. The most important of these were the Pharisees, who were strict observer of the Law of Moses; the Sadducees who believed that there is no resurrection; the Ninevees, who were dedicated to God, and the Essenes, who were ascetics.

The Pharasees boasted that they followed the Law of Moses literally. They wore special clothes and could always be easily recognised in a crowd of people. Το use the words of our Lord, “they do all their deeds to be seen by men; for they make their phylacteries broad and their fringes long, and they love the place of honour at feasts and the best seats in the synagogues, and salutations in the marketplace, and being called rabbi by men” (Matt. 23:5-7). They separated themselves from the rest of the people, believing themselves to be the just in the Eyes of God. The Publican on the other hand, belonged to a group who were hated and despised by rich and poor alike.

As we saw in last Sunday’s sermon, the Publican’s job was to collect taxes. However they did not stop at collecting the tax that was legally due to the Roman Empire, but imposed heavy surcharges which went into their own pockets, and which were a crushing burden for the people to bear. But they were especially hated and despised not only for their corruption, but for the fact that they collaborated with the Romans.

Now let us see what these two men did, when they entered the Temple.

The Pharisee stood and prayed to “himself’ (Luke l8:11), that is to say he did not turned to God, but to his pride, which meant that in the eyes of God his apparent pious acts were vain and futile.

The Pharisee feared to face the reality of his inner condition and did everything to avoid exposing himself to the justice of God. Appointing himself as his own judge, he always assured himself of a favourable verdict and every time escaped condemnation. Ιn this way his self-satisfaction at feeling just at all times was never disturbed. As a result he set himself above other men and boasted of his good deeds.

The Pharisee in desisting his own justice, condemns generally his fellow men, calling them “extortionist”, “unjust”, “adulterers” (Luke l8:11) and then specifically the tax collector standing near him. This personal condemnation of the Publican by the Pharisee was the cause of his own condemnation in the eyes of God.

When man turns against his fellow men, without mercy, without understanding, without love, he then calls down upon himself the divine condemnation. God turns His Face away from those who refuse mercy to their fellow men.

The actions of the Pharisee were just according to the Law of Moses. But they were not able to justify him in the eyes of God, because they were the work and fruit of pride, self-satisfaction and self-righteousness. The Pharisee was not interested in the justice of God. He went to the Temple not to pray from love of God, but to make a display of his piousness before the other people believing that God was obliged to reward him.

Man can make no bigger mistake than to believe in his own justice and sinlessness. Such pride and vanity blinds man, not allowing him to realise that he is a sinner and that without the Grace of Christ he cannot be saved.

Some Christians, refusing to face the reality of their own sinfulness, think only of the sins of their fellow men and condemn them accordingly. They rest secure in the belief that they are justified before God, because they keep some of His laws. But, what of His Supreme Law?

If we truly love Christ, then in our daily lives we will try to be true disciples. He said “if you love Me, you will keep ΜΥ commandments” (John l4:l5). An Orthodox Christian continually strives to imitate the life οf Christ. As a human being he falls, but shows repentance. Nobody is perfect but God, Who in His great love gave to mankind the means of salvation, the weapons to overcome the enemy. Two of the greatest of these weapons are Holy Communion and the Sacrament of Confession.

Our realization of our sins leads us to repentance, and repentance leads us to confession. Our confession to the priest brings down upon us the Grace of Christ, namely the forgiveness of sins. However, many how great they might be, through true repentance and confession they are all forgiven.

Such forgiveness was granted to the Publican as opposed to the Pharisee. The Publican realised his sinfulness and humbled himself before God so much so that he didn’t ”lift up his eyes to Heaven, but bear his breast, saying ‘God be merciful to me, a sinner’” (Luke l8:l3). He didn’t judge any of his fellow men, but only himself. He asked for the mercy of God and received it.

Today’s Gospel has many things to teach us. We Orthodox Christians must learn from today’s parable, that, when we wish to pray, we must approach God with a humble and contrite heart and having love towards all our fellow men, and most of all to forgive one another. God hears the prayers of humble men. The humble Christian imitates Christ, Who humbled Himself, “even unto death on the Cross” (Phil. 2:8).

The parable teaches us the way in which we must not pray, that is with boastfulness and pride. When we pray only to show off, then we lose our reward and our prayers become not worship to God, but blasphemy in His eyes.

Elsewhere in the Gospel our Lord teaches us that, “when you pray, you must not be like the hypocrites; for they love to stand and pray in the synagogues and at the street comers, that they may be seen by men. Truly, Ι say to you, they have received their reward. But, when you pray, go into yourroom and shut the door, and pray to your Father who is in secret; and your Father who sees in secret will reward you” (Matt. 6:5-6).

Βy means of today’s Parable, our Lord wanted to teach us how important it is for us, when we pray, to put aside all thoughts, problems and worldly cares and to con­centrate our attention on Him alone.

Sunday of the Publican and the Pharisee