/ Catechisms and articles / The Transfiguration of our Saviour
<--Back

The Transfiguration of our Saviour

From the 6th to the 15th of August, for eight consecutive days, the Church celebrates the Transfiguration ( Metamorfosis)  of our Lord Jesus Christ.

A little while before His voluntary Immaculate Passion and His death on the Cross, Christ isolated Himself for prayer on top of a hill (a mountain, as it is given geographically in Palestine), which is known by the name Tabor. With Him were present His three exceptionally loved and trustworthy Disciples, namely Peter, James and John.

If we are to accept the opinion of Eusebious of Caesaria, which Saint Nikodemus the Hagiorites also agrees with, as well as other Holy Fathers of the Church, this event must have taken place forty days before His Passion. However, the exact number of days, for us, is not of great significance. What is important is the reality of the event itself.

“And while He was praying, the appearance of His countenance was altered” writes the Evangelist Luke “and His raiment became dazzling white”(Luke 9:29). According to Matthew and stated more explicitly: “And He was transfigured before them and His face shone like the sun, and His garments became white as light” (Matthew 17:2). Likewise appeared, in front of the eyes of the Disciples, Moses and Elijah, who were conversing with Jesus, they were overshadowed by a bright mist, a luminous cloud. And from this mist, a voice was heard, which said: “This is my beloved Son, with Whom I am well pleased! Listen to Him!”

This event constitutes a triple divine revelation, when the identity of Jesus is revealed to the Apostles. That is not only the strange change in His appearance and the inundation of light which emanated from His face, but the witnessing of the voice of the Father and the presence of the two most holy people from the “other side”, that is, Moses and Elijah are confirming without a margin of doubt that Jesus is not just a simple person, or a wise teacher, a virtuous reformer of some new-wave of life-style, a charismatic miracle-worker, or even, a Prophet or a Saint, but He is the Son and the Word of the Living God! True God from True God! light from light! The true and eternal light, which illuminates and sanctifies “every person who comes into the world”. It is revealed in a triumphant way that He who lived with them for a whole three years and asked: “who the people say that I am?” (Matthew 16:13); the One Who treated them as friends and brothers, Who in a short while will be driven to the awesome Golgotha, the (place of a skull), where He will be crucified and die; and the One Who was buried in a stranger’s tomb, like a common mortal, a foreigner, rejected by the people, even as one of the departed! He who will appear insignificant and weak, without “stately or comeliness”. He is the One True God, the only worthy of worship, Adonijah, the Lord, Elohim, Jehovah – as some may prefer!… Thus, when they will see Him on the Cross, suffering and dying, according to His second nature, the human one, this should not cause them to be scandalised and loose their faith, but to comprehend that His Passion and His death were voluntary, a further emptying of Himself, an overflow of His love for Man and his salvation. Furthermore, to preach to the entire world that He, truly He, the One Crucified, Buried and Resurrected, Jesus Whom they saw and acquainted themselves with, in His company, heard and felt with their hands, is the reflection of the glory of the Father which so beautifully the Kontakion (hymn) of the celebrated day underlines:

“You were transfigured on the mount, and Your Disciples, so far as they were able, beheld Your glory, O Christ our God; so that, when they should see You crucified, they should remember that Your suffering was voluntary, and could declare to all the world that You are truly the effulgent Splendour of the Father”!

Hence, the Transfiguration of Christ is a revelation of His divine identity and certainly within the limits which the Apostles could uphold “so far as they were able”. It is impossible for someone to see God in all His glory and grandeur, and to survive!… The dazzle, the surprise, the awe and the excessive joy – if one is purified, like Peter, James or John and all the Saints throughout the ages – or the sadness, if he is unclean and unrepented – like the majority of us, will destroy him. It will yield to him apoplexy!… This is why the All-Merciful God suitably organises the things and reveals only a portion of His light, of His magnificence and of His glory, as much as His Disciples can endure!… Then again, as He reinforces them spiritually, in an exceptional manner, transforming their inner-self and not allowing them to remain in their usual state, that of a weak everyday human!…

Furthermore, the Transfiguration of our Saviour is a revelation of the Mystery of the Holy Trinity; The Son and Word 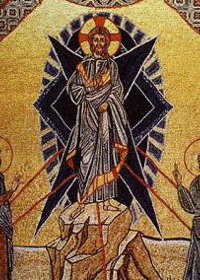 of the Father is present bodily on Tabor, as the God-Man Jesus Christ. The Father is heard to be saying: “This is my beloved Son, with Whom I am we// pleased”. The Holy Spirit appears in a paradoxical form of a bright mist. A bright cloud is an oxymoron! However, the Comforter makes His presence perceivable in a “holy-paradoxical” and most “God-properly” manner, above and beyond every “logical” or “normally occurring” event!…

This truth is expressed marvellously in the most theological “Exaposteilarion” hymn of the Matins of the celebrated day: “O You Word, untransformable Light, the Light the unborn Father, by Your light which has shown today on Tabor, we have seen the Father’s light and the Spirit’s light, lighting the whole creation”.

In the Byzantine iconography, I mean the Orthodox iconography, the icon of the Transfiguration of Christ clearly expresses this revelation of the Mystery of the Holy Trinity. Christ appears on Tabor in two successive bright figures, “glories” – as they are called. An oval or circle, which symbolises the bright mist, and another shape in a form of a rhombus or something like an isosceles triangle with rays emanating from its base, depicting symbolically the voice of the Father. Therefore, the holy icon of the Transfiguration is for us, the Orthodox, simultaneously an icon of the Most-Holy Trinity!

The Transfiguration of our Saviour reveals something more! It reveals what is to become of us, the faithful, provided of course we love Him sincerely and keep all His commandments and proceed in accordance with His divine wishes, and labour with honour His orders of deliverance, enforcing His Bible unadulterated, and living the life of the Church in purity, and correct worship in communion with all the Saints, equally with those of the “Triumphant”, and those in the “Militant” Church, who constitute the non-deceived teachers and leaders of those wishing salvation.

The divine alteration that occurred to the three Disciples on Tabor during the time of the Transfiguration of the lord will happen to us too and we will be worthy to become “God-viewers”, like them and all the Saints of the ages. The light which they received from the strange and the not-created light of His Godliness not only to their human eyes but throughout their whole body and soul, as far as the depths of their existence, which made them lighted and “God-similars”, we will also receive!

That unspeakable joy which was foretasted, and made the always enthusiastic Peter to say: “Lord, it is good for us to be here; if You wish, we will make three booths here, one for You and one for Moses and one for Elijah.” (Matthew 17:4). let us stay here, he wanted to say, forever on Tabor, never to descend to the daily routine of contemporary reality and the earthly afflictions!… This God-given joy, the only true and inalienable joy, will also come to us… The eternal beatitude which Moses and Elijah enjoyed and erected to the right and left of the God-Man, will be granted to us too…We will become “communicants of the Divine Nature” (2 Peter 1:4) and partakers of the eternal life… Saints from the sole Saint!… Righteous from the only Righteous One and lights from the only true Light!… Small gods, by the Grace of God, and not because of our worthiness!… Gods with a lowercase initial ‘g‘, from the Only God, the Great, the only One worthy to be written with a capital initial ‘G‘!… The beginningless Father, the equally beginningless Son and the co-eternal All-Holy Spirit!

The certification and credibility of that field are our Saints, the ones to whom this already has occurred. They have already achieved Theosis (Deification) and shine as luminaries into the spiritual firmament of the Church, radiating the light of the knowledge of God and the true Theology. Our Saints with the miracles they perform are partakers of the Divine Grace and communicants of God, and through their holy relics, which are full of the Divine Grace and allow us to keep them as a priceless treasure and venerate them feeling their inexpressible fragrance which they give forth!… We see how these holy relics cure the ill and cast away the unclean spirits which are visible samples of unification with God, thus giving a truthful witnesses that “those who have excelled and peaked in virtues – like themselves – will obviously be worthy of the Godly glory”…!