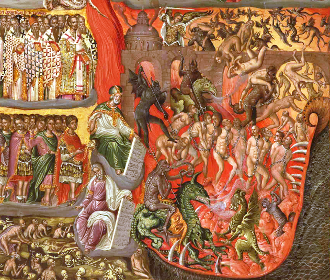 Does another world exist? Behold, my beloved, the huge question that the sacred gospel sets forth today.

I once went to a village, and there they asked me: Who came from the other world? Maybe someone was resurrected, to tell us what’s going on there?…But what do you understand, these people who ask to see a dead man resurrected, if he is resurrected, will they believe? I doubt it. I won’t deny that to see a dead man resurrected is no small testimony. But there is yet a more powerful testimony. Even if a thousand dead people rise up from their tomb, they aren’t silencing testimonies. Because they are people. I have an invincible witness; him whom today’s gospel says, and is more than every other proof and evidence and document. And he is holy Scripture.

Holy Scripture never said a lie; no mistake was ever found in its pages. It contains the words of God. Christ said it: “The heaven and the earth shall pass away, but my words shall not pass away” (Matt. 24:35). I then, my brethren, am not waiting for a dead person to be resurrected from the tomb. Nor for my faith to be verified by an x or y scientist. It suffices for me, and I bless the holy Trinity for this, who gave us this small book, the Gospel, so we can have it as guide in our life, a lighthouse in the darkness of the soul.

For this reason unfortunate is the person who doesn’t read the Gospel, and more unfortunate is whoever reads but doesn’t try to practice it. I recommend, therefore, and entreat you: No home without a Gospel! Saint John Chrysostom says: “Wherever the Gospel is, there the devil doesn’t wedge in.”

The immortal Gospel assures us also that another world exists. The Old but especially the New Testament preaches it. Hell exists, paradise exists. It preaches it everywhere, and today’s parable of the rich man and Lazarus says it.

Should we narrate it? It is known. What does it say?

Voices are heard. From where? The rich man shouts from hell. Hell? You’ll say, my, my…Let me tell you, my brethren. I today didn’t want to preach. When last night I read the passage, I said: Oh, if only I could be in a cave of Mount Athos, for God to save me, so I too won’t go to hell!…Because I, as a sinner, don’t want hell to exist. But it exists unfortunately! Just as night exists, hell exists. And hear what the rich man from hell is discussing with righteous Abraham in paradise, there where poor Lazarus went, The gospel says these things today.

The rich man sees Lazarus in those grandeurs and begs Abraham for a little refreshment. It’s impossible, answers Abraham. Then he asks a favor for his five brothers; for Lazarus to be resurrected from the dead and to go tell them to repent, so that they too don’t end up in hell. Says Abraham: “They have Moses and the prophets” (Luke 16:29), they have holy Scripture. – No, says the rich man; if there is a resurrection from the dead, they will be persuaded. – No, Abraham finally says; if they don’t believe in holy Scripture, even if a dead person were to be resurrected, again they won’t be persuaded.

You’re asking for my opinion? It has no value. Let’s base ourselves again on holy Scripture. What does it say on this subject? With icons, examples, with allegorical and metaphorical language, it gives us an idea of fearful hell.

In a few words hell = fire, a sea of fire, a burning lake; fire, which although is burning does not illumine. Hell is darkness. Hell is the gnashing of teeth; the jaws will be knocking. Hell will be the hunger and thirst of eternal goods and blessings; those in hell “shall starve like a dog” (Psalm 58:7,15), they will be like starving dogs. Hell – we aren’t finished – means a place of stench from the uncleanliness of the sinners. While tombs of our saints opened and exuded fragrance – we believe in the honorable relics – , the bones of sinners will exude stench. O you people who spend such exorbitant sums on fragrances, think, that one day this body of flesh will be a source of indescribable stench. Hell is the unbearable bonds. Hell – I haven’t told you anything – is a place where the flower called hope isn’t planted. Everybody, the criminal, the murderer, the condemned one, and the jailed person, live with hope. Hope, never leave man! But there, in hell, there is no hope of change and correction. Days, weeks, months, years, centuries, millenniums shall pass, but hell shall never end.

An example. Which is the biggest mountain in Greece? It’s mount Olympus; it’s three kilometers high. Imagine this mountain being made of delicate sand, like the sand of the Sahara Desert, and a little crow coming every thousand years and taking with its beak a grain of sand. Or imagine an ocean, and every thousand years an angel comes by and takes a drop of water. How many thousands of years must go by until the moment comes in which the crow will take the last grain and the angel the last drop! At all events this moment will come, you can be sure of it; a moment won’t come, however, when the angel will say “hell is finished”.

Oh, if only the voices of those in hell could reach our ears, what would we hear? Weeping and great wailing was heard in the “valley of Jehosaphat” (Joel 4:2). What do they say? One word, which here in this world don’t say it, my brethren; it’s a sin. Which word? “Curses”, “Curses”!…What are they cursing?

They will be saying: Feet, which on Sunday ran to the devil’s centers, to stadiums and theaters, and didn’t step in church, may you be cursed. Hands, that didn’t make the sign of the cross properly and rhythmically with the prayer “Our Lord Jesus Christ, have mercy on me the sinner”; hands which didn’t give alms, hands which hit, which wounded, hands which killed, hands that palmed the holy Bible, hands that hit mother and father, be cursed. Ears which for hours were stretched out to hear whatever is shameful; ears which closed in order not to hear the preaching of the gospel, sinful ears, be cursed. And you, eyes, which instead of seeing heaven, the stars, the holy icons, you opened up to sin and became magnets of hell, be cursed. Tongues, which never said “Glory to You, O God”, tongues which gossiped, poisoned, and slandered; tongues which opened up and blasphemed God, the superholy Theotokos, the saints, be cursed.

O my brethren! Will you practice these words, will you repent? What will you do today? If you make the good decision, joy to the angels, joy in heaven, joy in the holy Trinity. If however you don’t repent, O then you can be sure, that a day will come, in which an angel of the Lord will call for us “it is finished”. For “it is ordained for men to die once, and after this judgment” (Heb. 9:27), we will die and will be judged.

I give you finally a wish: “Let the end of our life be Christian, painless, shameless, peaceful and with a good defense before the fearful judgment seat of Christ” (Divine Liturgy). I wish all of us, when the last hour reaches us, that we seal our life with the words of the thief  “Remember me O Lord, when You enter into your kingdom” (luke 23:42) Amen.