/ Saints and Elders - Elder Paisios / St. Paisios of Mount Athos.The miracle with a mountain climber
<--Back

St. Paisios of Mount Athos.The miracle with a mountain climber

“On one of my many visits to the elder,” relates a pilgrim,[1] “I had my son, Constantine, with me. I said to the elder, ‘Constantine mountain-climber, and he even does very dangerous scaling on the rocks.’ 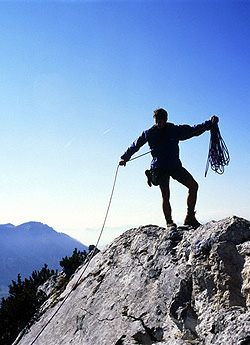 “‘Constantine,’ the elder said, ‘you can climb high [spiritual] mountains, because that’s how you get closer to God. But don’t go rock-climbing again, because it feeds your pride.’ And the elder had a long talk with him, giving examples from his time in the army. When he saw us off at the gate, he kissed Constantine on the head and repeated, ‘Don’t go rock-climbing. But if you end up doing it some time, I’ll pray for you.’ Well, on the basis of that little opening, Constantine continued to rock-climb without telling us.

“In September, I made another trip to see the elder. There were a lot of people there; and, as soon as he saw me, he said, ‘Sit here till the end, so I can tell you something important.’ Afterward, he said, ‘Constantine fell while he was rock-climbing. It was sixty-five feet from one anchor to the other, and the Panagia held him in her arms. I saw it with my own eyes.’

“As soon as I got back to the hermitage where I was staying, I called Constantine in Athens, where he was studying. ‘Constantine,’ I asked, ‘did you fall during a dangerous climb?’

‘Are you at the elder’s?’ he asked immediately. I said that I was, and he replied, ‘Go thank him for me, and tell him that I’ll sell all my equipment, and I won’t climb again.’ And that’s just what happened.”

St. Paisios of Mount Athos.The miracle with a mountain climber