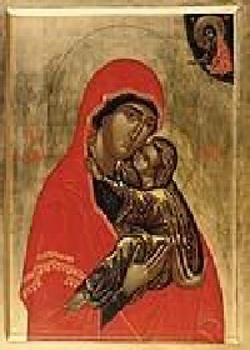 Saint Anna (also Ann or Anne, from Hebrew Hannahחַנָּה, meaning “favor” or “grace”) of David‘s house and line, was the mother of the Virgin Mary and grandmother of Jesus Christ according to Christian Tradition. St Anna is the Greek rendering of her Hebrew name Hannah. Mary’s mother is not named in the canonical gospels.

Christian view: According to the Gospel of James, a document of the New Testament apocrypha, St Anna and her husband St Joachim, after years of childlessness, were visited by an angel who told them that they would conceive a child. St Anna promised to dedicate the child to God’s service. St Joachim and St Anna are believed to have given Mary to the service of the Second Temple when the girl was three years old.

The story bears a superficial similarity to that of the birth of Samuel, whose mother Hannah had also been childless. Although St Anna’s cult receives little attention in the Western church prior to the late 12th century, dedications to St Anna in the Eastern church occur as early as the 6th century. In the Eastern Orthodox tradition, St Anna is ascribed the title Forbear of God, and both the Birth of Mary and the Dedication of Mary to the Temple are celebrated as two of the Twelve Great Feasts.

In Western iconography, St Anna may be recognized by her depiction in red robe and green mantle, often holding a book. Images may also be found depicting St Anna holding small Mary who in turn holds the Infant Christ.

St Joachim was St Anna’s only husband. Ancient belief, attested to by a sermon of St John Damascene, was that St Anna married once. Mary, mother of God, Mary of Clopas, and Mary Salomae, were first cusins. The sister of Saint St Anna was Sobe who was the mother of Saint Elizabeth.

The Orthodox Church teaches that Mary was conceived in the normal fashion, but that she was miraculously cleansed from original sin at the moment of Her Annunciation in order to make her fit to bear the incarnated Son and Word of God.

The iconographic subject of St Joachim and St Anna The Meeting at the Golden Gate fitted both views, and was a regular component of artistic cycles of the Life of the Virgin. The couple meet at the “Golden Gate” of Jerusalem and embrace. They are aware of St Anna’s pregnancy, of which they have been separately informed by an archangel. For those believing in the virgin birth of Mary, this moment stood for her conception, and the feast was celebrated on the same day as the Immaculate Conception. The Birth of Mary, the Presentation of Mary and the Marriage of the Virgin were usual components of cycles of the Life of the Virgin in which St Anna is normally shown.

St Anna is never shown as present at the Nativity of Christ, but is frequently shown with the infant Christ in various subjects. She is sometimes believed to be depicted in scenes of the Presentation of Jesus at the Temple and the Circumcision of Christ but in the former case this likely reflects a misidentification through confusion with Anna the Prophetess. St Anna is described in Luke’s Gospel as a holy widow who recognizes Jesus as the Messiah at his Presentation, along with Simeon the Righteous and both frequently appear in artistic depictions of the story. There was a tradition that St Anna went (separately) to Egypt and rejoined the Holy Family after their Flight to Egypt. St Anna is not seen with the adult Christ, so was regarded as having died during the youth of Jesus. St Anna is also shown as the matriarch of the Holy Kinship, the extended family of Jesus, a popular subject in late medieval Germany. In modern devotions, St Anna and her husband are invoked for protection for the unborn.