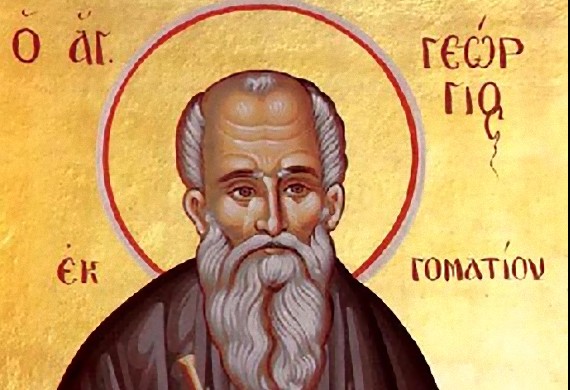 Saint George lived in Gomati of Halkidiki at the beginning of the 19th century AD, when Greece was enslaved to the Turks. He had a family and a mill. His love and charity were known throughout the region. In his mill would grind wheat for free for the poor and give flour to the helpless. The ruins of his mill can still be seen today. During those difficult times of the Turkish rule and the constant revolutionary movements in Halkidiki, he lost his family, and decided to dedicate his life to God. He went to the mountain, which was above his mill to live ascetic life, alone, with God. Tradition says that a Turkish military detachment was about to pass through the area. Because he feared that the Turks would surely come through the mill to seize flour and wheat, he advised his wife and children to go and stay in the village for safety. But she did not obey him and when the Turkish army passed by, they found the family and captured them. When the Saint returned, he found the mill destroyed, the flour stolen, and the family lost. His soul ached at the destruction of his family and property. Then he made the great decision of his full dedication to God. For his place of ascetic life, he chose a cave. There he spent his life in unceasing prayer, fasting and strict exercise. Whatever was growing in the mountain was his only food. He lived as a hermit, without even becoming officially a monk. However, even in this phase of his life, he did not fail to show love and compassion to his fellow men, the Christians of his village. He would sneak down from his hermitage at night and leave wood for the fire outside the doors of the houses of pregnant women, the sick and the poor. He tended the gardens and vineyards of the villagers that were poor and tended the animals of those in need. When his traces once disappeared, some shepherds who knew him, sought him out. They went up to his hermitage and there they found him in his cave, dead, but smelling of a wonderful scent. His body was so thin, almost a skeleton, from exercise and fasting and the whole place was smelling a magnificent fragrant. Other Christians and the priest of the village went and lifted his holy body, truly his holy skeleton, with reverence, to carry it to the village cemetery for burial. On the way, the sacred skeleton became extremely heavy. So much so that they could no longer move it. The priest said that this was a sign, and it should be buried there. Thus, they buried it in the place where the chapel of the saint is built today, on the road to Gomati. Later, they built a stone chapel over the grave. Then, a small new church was built. After his death, the Saint began to perform many miracles, proof of his holiness. God gave the Saint a special gift to heal the pain from the ears of small children.

SAINT GEORGE OF GOMATI (celebrated 7th of May)