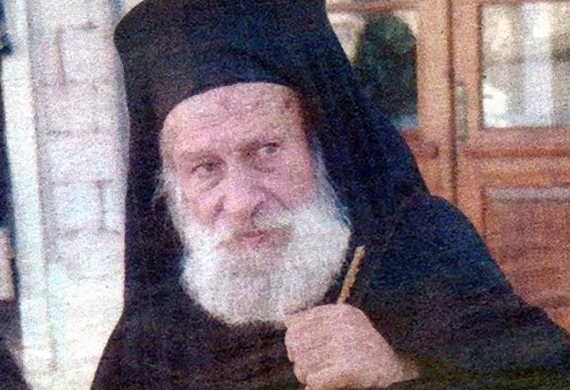 One time late in the day, the hieromonk Father Fotis visited a house in our town Mytilene of the island of Lesbos, and he stayed there over night. Before he fell asleep, he gave the following command to the owner of the house: “Tomorrow morning we have a job to do.”

Upon waking up the next morning, they left Mytilene and went to Father Fotis’ sanctuary, where he quickly took the sacred utensils and his priestly attire. Together they headed to the picturesque church of the Mother of our God the “Milk-Giver”, within the old castle of the city.

Once there, Father Fotis performed the Holy Liturgy and then picked up the Holy Gifts and as he was fully dressed in his priestly vestments he headed to one of the brothels which, in those times, used to be in that area.  There, the Father administered last rites to a dying prostitute named Evlambia (last rites in the Orthodox tradition consist of the Sacred Mysteries of Confession and the reception of Holy Communion).  The woman, immediately after receiving communion found “Rest in our Lord” and died.

Later on, the house owner asked him about this incident, and Father Fotis said:

“Incidents such as this have happened many times before. One woman close to the Church of Saint Symeon told me of such occasions, and so I started visiting the troubled souls in the brothels. They allowed me in with respect and courtesy. I was talking to them about the repentance from sins, the salvation of their souls, and the life to come. I never talked meanly to them, but lovingly, and I would tell them to repent and that Jesus would take care of them and would fully restore them in his heart. Many of them repented.”

Father Fotis then told the man: “You asked if I was scared. Who should I be afraid of? We only fear God when we sin. I do not care about what people will say; I was acting for Christ!”

Father Fotis Lavriotis (of the monastery of Great Lavra)

A visit by Father Fotis