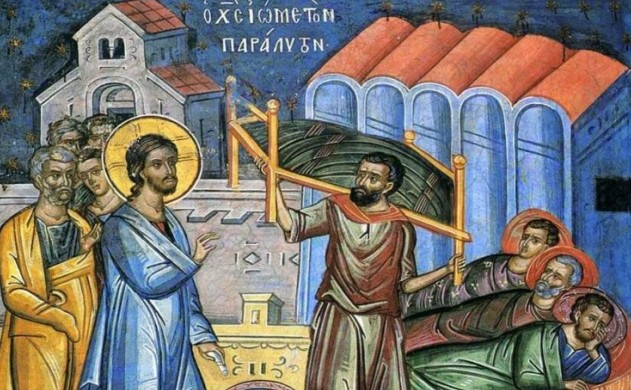 In today’s Holy Gospel our Lord and Saviour Jesus Christ entered Jerusalem and went to the pool near the sheep market called Bethesda. There, a great multitude of ill people were waiting patiently “for the moving of the water” in order to enter into the pool and be miraculously cured from “whatsoever disease” they had. And St. John, the Apostle and Evangelist explains: “For an angel went down at a certain season into the pool, and troubled the water: whosoever then entered first after the troubling of the water stepped in was made whole” (John 5:4).

The water of this pool was used to wash away the blood of the sacrificial animals and thus it received the Grace from God that once a year and during an unknown time God sent an angel to trouble the water and cure one person. Near this pool was a certain man who waited for thirty eight years. His attention was focused on the surface of the water, waiting for the troubling of the water. But as soon as he struggled to enter the water, another stepped down first before him and was made well. This was repeated year after year, for thirty eight years and he never gave up. His hope was always strong, although everyone in his family and friends after some time abandoned him. His answer to Christ, “I have no man, when the water is troubled, to put me into the pool” proves that every one gave up their hopes for him.

No man near him was willing to help him. He was paralized, unable to move, unable to walk, and no man wanted to assist him in his time of need. He did not demand money from anyone. He was not a beggar. He did not demand from anyone to feed or clothe him. He just wanted one thing from those who were standing close to him: To throw him into the water at the right moment to be cured by God’s Divine Grace. And, unfortunately, there was no one to help him! He was abandoned by everyone.

Our Lord and Saviour Jesus Christ approached and asked him. If he wanted to be cured? What a question to ask. The man was paralysed for thirty eight years and Jesus asks him, if he wishes to be cured! Did Jesus not know? He is the God, who searches man’s heart and feelings. For nothing can be hidden from Jesus Christ. He is the God who created man and knows everything about man, his most secret thoughts, feelings and desires. And yet Jesus asks the man, if he wishes to be cured!

Jesus Christ, the Incarnated Word of God, became man to save mankind from the slavery of sin and death. He is the True Physician both of body and soul. Christ our God took up the nature of man in order to clean and purify man’s heart and mind, body and soul from the stain of sin. Christ took up the sins of mankind and was crucified for us and for our salvation. Through Christ’s wounds man found his natural state of spiritual health, as it was before the Fall. Christ died on the Cross in order that man shall live in His Name.

Today, we see the result of sin. The Paralytic man was paralized because of sin. Because of this Christ finds him and says to him: “Behold, thou art made whole: sin no more, lest a worse thing come unto thee” (John 5:l4). You see that Christ cures not only the illness, but also the cause of illness, which is sin.

Sin is not man’s natural condition. It is something like a virus, which invaded man’s soul and brought confusion to his life. Sin does not affect only the soul, but has its results also on man’s body. Sin causes spiritual paralysis, death and alienates man from God’s Grace.

Man was unable to restore his relationship with God, because of sin. No man was found sinless, in order to satisfy God’s Justice. Only through the obedience, which Jesus Christ showed dying on the Cross, reconciliation was achieved, and Jesus became the only Mediator between man and God. In His divine name all things in heaven and on earth bow before Him. With Christ’s Resurrection, man is raised up to the level of deification and sanctification. He is able now to partake of the Divine Nature and to achieve, through God’s Grace, holiness in the “image of God”.

Sin and death have no dominion over mankind. Sin was conquered through the human nature of our Lord, which was sanctified by His Divine Nature. Jesus Christ as the only Godman is the only sinless amongst all men, and being God he offered to man the restoration of his bodily and spiritual health.

In many Parables, which our Lord had taught, it is revealed that God seeks for the ill man, as the Good Samaritan helped the man who fell into the hands of the robbers.

In Orthodox Spirituality the final aim of man’s life on earth is to achieve his restoration of health through God’s Divine Grace. When man’s health is restored, then he is sanctified. He becomes a living saint, as this is the Will of God. “Be holy as your Father in Heaven is Holy”. Man becomes ill, when he enslaves himself to sin. Christ taught us saying, that he who commits sin, is a slave to sin. Man can be free from the boundaries of sin only if he submits himself to Christ.

In our daily life each and every one of us has to choose amongst two wills which one has to follow. The Will of God or the will of satan. God expects man to practice His Divine Will voluntarily and not by any kind of force. By man’s freedom of choice, he is able to reach the stage of virtues. Apart from God man cannot live a virtuous life, because he will always be under the slavery of sin. If man refuses to submit his will to God, then by his own free will he chooses to follow satan’s will. Man becomes an instrument of sinful passions and desires, which lead him to the destruction of his spiritual and bodily health.

Sin does not only affect man’s soul, but also has its result on the body. Satan is the only enemy of man, who wishes man’s spiritual and bodily eternal destruction. He is not concerned for man. He has only one thing in mind and that is how he shall destroy man for all eternity.

When we commit sin, we actually submit ourselves to satan. This is why our Lord at the Last Judgement He condemns the unrepented and sinful men, because they had preformed satan’s evil will.

The Will of God concerning man is for man to participate in His Divine Glory. God created man not to be a servant of sin, but to be the living image of God on earth. The restoration of man was achieved through Christ’s Sacrifice on the Holy Cross. Man is called to the freedom of Christ. This freedom is granted when man denys his sinful desires, takes up his cross and follows the example of life which Christ gave to mankind. Christ is the Truth, the Way and the Life for all men. Through Him man finds the true goals of life. By the Grace of our Lord man is able to resist sin and to become a virtuous vessel of holiness. In God man finds his true health.

The paralytic man of today’s Gospel found his health, when Christ approached him. God saw his faith, but also warned him not to sin again, otherwise his health shall become worse than before.

My beloved friends in Christ,

Each and every one of us had or has fallen into different types of sin. Let us approach Christ our God, Who loves man so much, that He gave His life for us. Let us ask with all our hearts and faith to bestow upon us His Divine Healing Grace; to heal us from all our spiritual wounds caused by sin.