Healing of the Ten Lepers – The 12th Sunday of Luke 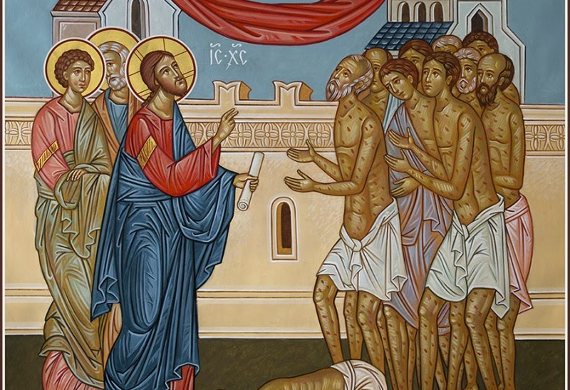 Human beings chose the life of sin, of pain, of suffering, but …

Which person does not feel as though his life is more-or-less a martyrdom? Certainly, everyone feels as though his martyrdom is bigger and incomparable to those of others. Human beings sinned, and the result of this sin is that people experience pain, become sick, struggle, and people die. It is not by chance that in this world we are tormented. God is not evil. God is not pre-empted by anything, nor in a more general sense does he want to chasten people. Human beings chose this life of sin, of pain, and of suffering. Despite this, God will change all of this into salvation.

A person does not simply wise up by that which chastens him or that which he is tormented by. On the contrary, in this way, he may feel himself pushed to even more evil. It is always few who, in the end, through all their pain, all their suffering, and the drama of their life, truly find God. In today’s gospel reading, one of the ten lepers becomes receptive. Having suffered for many years, he was suddenly shaken up as the word of Christ became reality: “Go” he told them, “and they were cleansed”. All his previous sufferings helped to rouse him, and to humble him. They led him to repent, to judge himself –since from there evils begin– and within all of this to bring forth a disposition to love God, and to follow Him, looking to nothing else in this life but the road of God.

This lone leper, when he was under the influence of his sufferings, as things show, obviously had thoughts about God. And even now that he is healed and redeemed from his passions, he remembers God, and runs to Him.

It is not by chance that these things happen in this way, moreover that one of the ten happened to return to thank the Lord, while the other nine did not even think to. The point is what is going on deep inside man’s heart. And so, whether you manage to think about God externally or not, if you love Him in the depths of your heart, in the end God will bring things together in this way; at a certain moment in time, whether in pain or being healed, you will find yourself on the road of God.

Healing of the Ten Lepers – The 12th Sunday of Luke