9th Sunday of Matthew (Jesus walks on the waters) 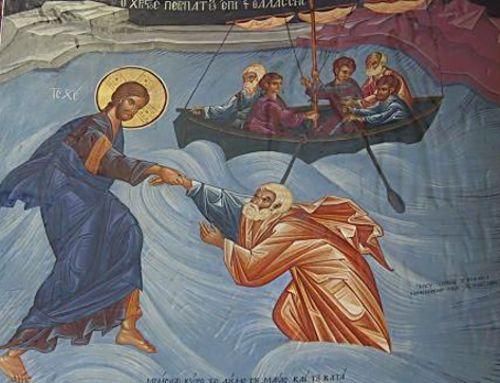 The disciples were ordinary men. But despite being close to Christ -seeing him, seeing the miracles he performed, and hearing his words- it was as though they were living in another world, as though they understood nothing. Normally, they should not have feared when they saw the Lord walk on the waters nor should Peter have begun to sink. Yet, Peter, is still driven by his own self and he would suffer many other things until the Holy Spirit came to him on the day of Pentecost, and baptized them all in the Holy Spirit and fire. And Christ questions him: “Why did you doubt?” And yet, Christ does not reject him in this instance, nor in others. He does not reject him, nor does he banish him.

Although the disciples were with Christ and listened as he spoke to them, they were influenced only up to a certain point, as they had human weakness. Peter, that old salt, so to speak, was afraid of the wind and began to yell: “Save me, Lord”.

All of this occurred before Pentecost. And yet, the disciples were not like this after Pentecost. They were changed, having the Spirit of God within them. And because of this, they became wonderworkers. Because of this they feared nothing. And in the end, almost all were martyred.

On the one hand, the Lord tolerates and shows condescension to our human weakness. And yet on the other hand, we have no excuse for not living a Christian life. We, who are baptized Orthodox Christians, have received in baptism the Holy Spirit -that which the disciples received on the day of Pentecost. And we also partake of the Body and the Blood of Christ when we commune. And despite all this, we for the most part resemble the unbaptized. We must be greatly preoccupied with this subject.

9th Sunday of Matthew (Jesus walks on the waters)