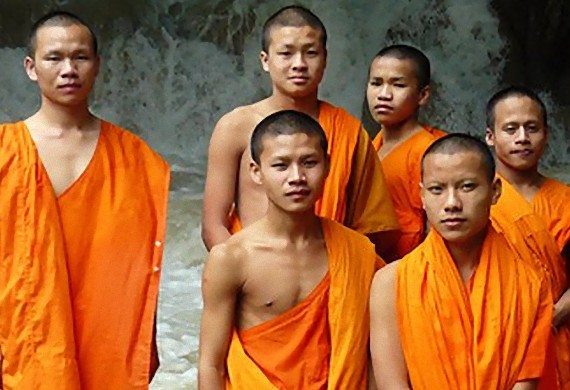 George, a young man of sixteen or seventeen, came to Mount Athos to go from one monastery to another. Though Greek by blood, he had been raised abroad from early childhood among Tibetan Buddhist monks in their monastery. He had made a great deal of progress in meditation, and he had become an accomplished sorcerer, able to summon any demon he wanted.[1] He was also an expert in the martial arts.  Using the power of Satan, he made impressive displays of his abilities: he broke hazelnuts in his palm, and tossed away the shells while the nuts remained attached to his hand. He could read closed books. He struck large rocks with his bare hand, and they shattered like walnuts.

Some monks brought George to the Elder so that he could help him. George asked the Elder what powers he had, what he could do, and the Elder answered that he himself didn’t have any power, and that all power is from God.

George, wanting to demonstrate his power, concentrated his gaze on a large rock in the distance, and it shattered. Then the Elder took a small rock and made the sign of the Cross over it, and told him to destroy it too. He concentrated and performed his magic, but he couldn’t shatter it. Then he started trembling, and the satanic powers―which he thought he controlled―since they weren’t able to break the rock, turned against him and hurled him to the opposite bank of the river. The Elder picked him up in a miserable condition.

“Another time,” recounted the Elder, “while we were talking, he suddenly stood up, grabbed me by the arms and spun me around backward. ‘Let’s see Hadjiefendis get you lose, if he can,’ he said. I felt it was like blasphemy to say that. I moved my hands a little, like this, and he was jerked away. He jumped up in the air and tried to kick me, but his foot stopped near my face, like it had hit an invisible wall! God protected me. 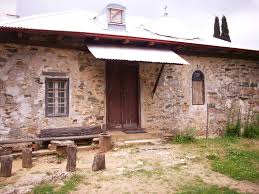 “At night, I kept him there, and he slept in my cell. The demons dragged him down into the pit and thrashed him for failing. In the morning he was in a bad state, injured and covered in thorns and dirt. He confessed, ‘Satan beat me up because I couldn’t defeat you.’”

The Elder convinced George to bring him his magical texts, and he burned them. “When he came here,” the Elder recalled, “he had some sort of charm or amulet with him. I went to take it, but he wouldn’t give it to me. I took a candle and said, “Lift the leg of your pants up a little.” Then I put the lit candle against his leg―he yelled and jumped up. “Well,” I said, “if the flame from a little candle is for you, how are you going to endure the fire of hell that you’re going to end up in because of what you’re doing?”

The Elder kept the young man close to him for a little while and helped him, so long as he was willing to be obedient. 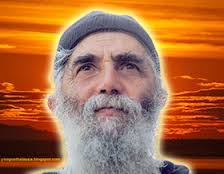 He felt such compassion for him that he said, “I would leave the desert and go out into the world to help this boy.” He made an effort to learn if he had been baptized and even found out the name of the church where his baptism had taken place. Shaken by the power and the grace of the Elder, George wanted to become a monk, but he wasn’t able to.

The Elder would refer to George’s case to show what a delusion it is to think that all religions are the same, that everyone believes in the same God, and that there’s no difference between Tibetan Buddhist and Orthodox monks.

[1] .The place α magic in Buddhism is unknown to many Westerners, who for the most part have been introduced only to a modernist Buddhism that excludes such content. A useful corrective is provided by the scholar Georges Dreyfus, the first Westerner to receive the Geshe degree of the Gelug school of Tibetan Buddhism.

“Unlike modern intellectuals, Tibetan scholars are never tempted to reject magical elements and often engage in these practices, though they may view them as limited in their effects and not relevant to the soteriological goals of the tradition. In this regard they are also unlike modern Buddhists, who are profoundly uncomfortable with the magical practices that exist in Asian Buddhist traditions” (pp 303–304). George Dreyfus, Sounds of two hands clapping. The education of a Tibetan Monk  Dreyfus discusses at length the Tibetan Buddhist practice of propitiating the “mundane” “dharma protectors”. “These violent spirits have taken an oath … to protect the Buddhist teaching. Despite this commitment, they are not completely tamed and are prone to quasi-human emotions such as anger, jealousy, and so forth. Hence, they are partial and can be enlisted in morally unseemly actions such as helping practitioners to secure worldly advantages or even kill an adversary” (p. 299). In fulfillment of their oath, meanwhile, the spirits “protect the person or the group, often by violent means,” from“‘ enemies α Buddhism’ (bstan dgra)“ (p. 300). Although “many Tibetans feel the tension between the reliance on these deities and the normative ideals of the tradition,” they “figure prominently in the ritual life of Tibetan monasteries…. But most of the rituals devoted to these deities are not performed in public but in the House of the Protectors (dgon khang), a separate temple devoted to them” (p. 300). Indeed, “Tibetans are often unwilling to introduce outsiders to [the practice’s] secrets. Temples are always open to anybody, but the House of Protectors is often less accessible and can even at times be closed to non-Tibetans” (p. 302).―eds.

Elder Paisios and the young George from the Far East