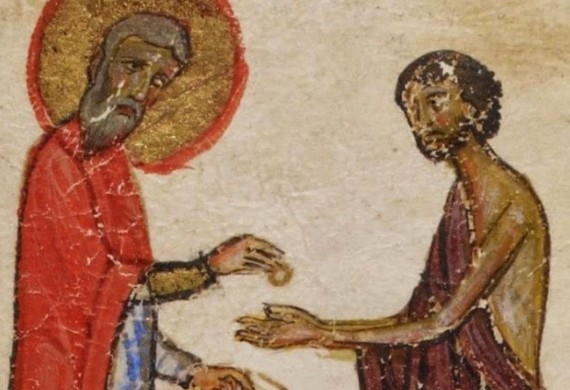 Everytime a poor man comes knocking at your door, try to see that behind his humble appearance is Jesus himself at your doorstep. Would you ever let Christ’s knocks on your door go unanswered?

Also, don’t forget that ” Whoever is kind to the poor lends to the Lord, and He will reward them for what they have done.” (Proverbs 19:17), and that “Almsgiving saves from death and purges away every sin. Those who give alms will enjoy a full life “(Tobias 12: 9).

The ethical status of the poor person who is seeking your help does not matter. The Lord is the judge of everyone, not you. Who are you, to judge your brother? Christ uses the poor as instruments that test your love for Him. Will you push him away?

From the “Spiritual Sermons”, Translated by Anna Pipinos

His sins were all forgiven because of a piece of bread he once gave to a poor man.

The example of blessed Peter the Tax Collector encourages us to be gracious towards the poor. God revealed to Peter in a vision that all of his sins were forgiven because of a piece of bread that he gave once to a poor man. Even the smallest of charities contributes to the salvation of our souls. However, we must do it with eagerness and joy, as Saint Isaak the Syrian teaches: “Before giving something to a poor person, look at him with a jovial face and console his grief with good words.”

By Saint Seraphim of Sarov, Translated by Anna Pipinos

His sins were all forgiven because of a piece of bread