The Nativity of Our Lord and Saviour Jesus Christ 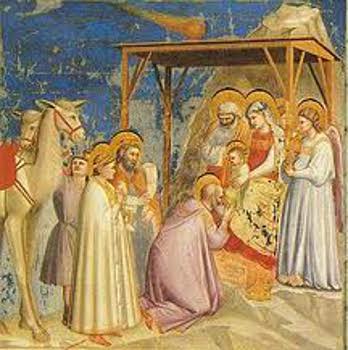 With special skills and grace the hymn-writers of our Holy Orthodox Church exalt the event of the Divine Economia through the sacred hymns of today’s great feast, that of the Incarnation of the Word and Son of God, our Lord and Saviour Jesus Christ.

The event of the Incarnation of God the Word consisted of a unique and unrepeated event. For it proclaimed not only the beginning of the salvation of mankind, but, simultaneously, it expressed the infinite Love of the One and Only True God, the Holy Trinity, towards His creation, man.

The Angels in Heaven rejoice; they glorify together with the shepherds of the humblevillageofBethlehem.  The whole Universe leaps with joy. The Earth offers the Cave; the desert the Manger; the heavens the Star; the Magi the presents; and we, the logical creatures of God the Creator, Who as an Infant is born today and is raped in swaddling-clothes and is placed in a Manger of the horses, offer ourselves, our hearts and souls to the Divine Infant.

Man, from the beginning of his creation, was gifted with many charismata and wisdom. God honoured man to be the king of all and became the crown jewel of all Creation. Unfortunately, Satan envied this honour and glory with which God vested man, so that through deception and craftiness he deceived the first-created.

The disobedience of the Divine Commandment became the starting point of mankind’s sufferings. Adam and Eve in their desperate situation, they attempted to cover their nakedness. This nakedness does not refer to the nakedness of their body, but to the spiritual nakedness of being deprived from God’s Divine Grace, which abandoned them at the moment when they had abandoned God and gave their trust to the Serpent.

Man’s mind and conscience were darkened. The first-created remained unrepentant. They did not take advantage of the three opportunities which God offered them for forgiveness.  The one throws the responsibilities to the other, and the worst of all was that Adam, who benefited more than any other creature, throws the blame of his fall to God Himself.

This ungratefulness of Adam and the insult against God is what is called as the Original Sin. Henceforth, this sin is inherited by all men, as being Adam’s offspring. This sin is forgiven only through the Holy Sacrament of Baptism.

The Fall of the first-created was great, as great as were the benefits which they had received from God. God, granted them all Nature and placed one only rule to keep. They had everything and, yet, they wanted to steel deification; they attempted illegally to become ‘gods’ as their Creator, but without the Grace of their Creator. God wanted them to become perfect through obedience to His Divine Will, but they wanted to achieve this perfection and deification without struggling. The results was catastrophic not only for Adam, but for all his descendants. Fear, cowardice, accusing of one another, lies, slander, hatred, envy, murder, mortality and finally death replaced man’s conditions which he had inParadise.

Man, from king of all Creation, became a slave to sin and death. Any attempt to restore his relationship with God was in vain. His mind was darkened so much that instead of worshipping the True God, he turned and worshipped the elements of nature. Idols replaced the Holy Trinity and man was led from one error to another.

But, the Love of God did not abandon the creation of His Hands deserted and unprotected. As a caring Father, He prepared the path of salvation. God through His Prophets proclaimed the Good News concerning the mission of His Elect, His Son and Word. The Messiah, the Saviour of the world, will come from the Virgin Mary, who through her holiness pleased God and proved that man is capable to conquer sin and to become a chosen vessel. God the Word will be born from the Holy Spirit and of the Virgin Mary and will become Man similar to us, but without sin. His mission will be one, to save His people from the slavery of sin and the tyranny of death.

Moses, in the Holy Spirit, sees the flaming but not burning Bush. Jacob dreams about the Ladder which united Haven and earth. Jezekiel sees the Eastern Gate through which the Lord God shall pass and it will remain shut. Isaiah sees the Virgin Mary from whom Jesus was born, the one Who is called Christ, which in Greek is translated Emmanuel and means that God is with us.

Truthfully, when the fullness of time came, God send His Son, Who is born from the Virgin Mary and as an Infant was wrapped in swaddling-clothes and circumcised.  As an Infant, He is persecuted by the insane Herod. As a perfect man, He dwelt amongst men and taught the people. He is false accused by the Jews as a seductive person. He is arrested and condemned unjustly as a Thief. He is crucified as Criminal and faced death; and on the third day, as God Almighty, He rose from the dead. He suffered all these things in order to restore Adam and all his descendants.

The Nativity of the Son and Word of God is the fulfillment of Divine Promise given in theGardenofDelightconcerning man’s salvation, and which begins with the birth atBethlehemand leads to the Crucifixion onGolgotha, the glorious Resurrection, the Ascension in Heaven and the Enthronement on the right hand of God the Father. Through this Divine Economia, the Son and Word of God ended the rule of Satan who held mankind under the bondage and tyranny of death. Christ grants to all those who will believe in Him eternal Life.

Christ’s Nativity gave to mankind the Light of the True Knowledge of God. Man, free from the darkness of not knowing God, can know the True God through the Light of the Holy Gospel and His Holy Orthodox Church. Freed from the falsehood of idolatry, man is able to worship the One and Only True God, the Holy Trinity. He knows the way, which leads him to conquer virtues and holiness. As a free person, man can walk on the path of salvation.

God leaves Heaven and comes down on earth. He becomes a perfect Man, in order to raise man to the heights of the Deity. The One Who is without flesh, takes up flesh. The One Who is Bodiless, receives body. He, Who cannot be contended by the Universe, is restricted in the boundaries of human nature, and simultaneously fills all things with His Presence.

God andMan.Two Natures and two Wills, which remain unmixed and unconfused, united in the One Person of our Lord and Saviour Jesus Christ.

“And the Word became flesh”, not that man became god, neither that man ascended into Heaven, but that God the Word out of love towards man took up all the human nature in order to sanctify and save it. God the Word, with His birth, overcame sin and freed mankind from mortality and death. Without this Divine Economia, no one could have inherited the eternalKingdom ofGod.

God the Word reveals Himself to man and invites everyone to become a member of His Kingdom. He invites all men to enter through the narrow path. He does not want anyone to be lost. Everyone can become ‘sons’ of God by adoption and Grace and co-heirs of Christ.

The Nativity of our Saviour and Redeemer Jesus Christ, the Incarnated Son and Word of God the Father, addresses us, today and sends us an important message and one special invitation:

Let us follow the Star, which guides us to Bethlehem of Judaea. Let us kneel with the humble shepherds before the Creator of all. Let us become co-travelers with the three Magi and let us offer to the Divine Infant our tears of repentance. Let us open our hearts and souls in order to welcome within us the Divine Infant which was born by the Holy Spirit and of the Virgin Mary. Let us abandon the sinful pleasures of this world of vanity. Let us receive with the simplicity of our hearts the angelic message, that “today a Saviour has been born, who is the Lord Christ” and let us sing “glory to God in the highest and on earth peace amongst men according to God’s Good Will”. Amen.

The Nativity of Our Lord and Saviour Jesus Christ