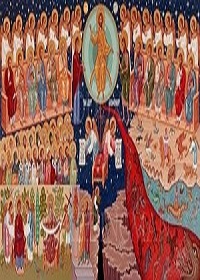 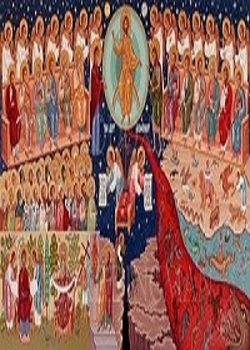 A memorial service (Greek: μνημόσυνον, mnemósynon, “memorial”, or παραστάς, parastás, “wake”; Church Slavonic: паннихида, panikhída) is a liturgical observance in honor of the departed which is served in the Eastern Orthodox and Greek-Catholic Churches.

The service: In the Eastern Church, the various prayers for the departed have as their purpose: to pray for the repose of the departed; to comfort the living; and to remind those who remain behind of their own mortality, and the brevity of this earthly life. For this reason, memorial services have an air of penitence about them,[1] and tend to be served more frequently during the four fasting seasons (Great Lent, Nativity Fast, Apostles’ Fast and Dormition Fast).

If the service is for an individual, it will often take place at their graveside. If it is a general commemoration of all the departed, or if the individual’s grave is not close by, the service will take place in a church, in front of a special “memorial table”. The memorial table is a small, free-standing table to which has been attached an upright crucifix, sometimes including also icons of the Theotokos (the Virgin Mary) and the Apostle John. The table will also have a place for the faithful to put lighted candles.

The deacon (or, if there is no deacon the priest) will swing the censer throughout almost the entire service, and all will stand holding lighted candles. Near the end of the service, during the final Troparia, all will either put out their candles or will place them in candle holders on the memorial table. Each candle symbolizes the individual soul, which, as it were, each person holds in their own hand. The extinguishing (or giving up) of the candle at the end of the service symbolizes the fact that each person will have to surrender their soul at the end of their life.

The service is composed of Psalms, Ektenias (litanies), hymns and prayers. In its outline it follows the general outline of Matins,[2] and is in effect a truncated funeral service. Some of the most notable portions of the service are the Kontakion of the Departed,[3] and the final, slow and solemn singing of “Memory Eternal” (Slavonic: Vyechnaya Pamyat).

The memorial service is most frequently served after the Divine Liturgy; however, it may also be served after Vespers, Matins, or as a separate service by itself. If the service is held separately, the readings from the Pauline epistles and the gospel are assigned by day. No readings are however assigned to Sunday (because Sunday should emphasize the resurrection of Christ rather than the departed.

Koliva: For the memorial service, koliva (a ritual food of boiled wheat) is often prepared and is placed in front of the memorial table or an icon of Christ. Afterwards, it is blessed by the priest, who sprinkles it with holy water (in the Bulgarian Church it is also customary for the priest to pour wine on the koliva and on the grave). The koliva is then taken to the trapeza or refectory and is served to all those who attended the service.

Occasions: After an Orthodox (or Eastern Rite) Christian passes away, there are special “Prayers for the Departure of the Soul” that are said by the priest. Then the family or friends of the departed will wash and dress the body and it is placed in the casket. Then a special expanded memorial service called the First Panikhida is celebrated, after which the reading of the Psalter is begun, and continues uninterrupted until the funeral.

Traditionally, in addition to the service on the day of death, the memorial service is performed at the request of the relatives of an individual departed person on the following occasions:

It is also served on the numerous Soul Saturdays throughout the year.[5] On these days, not only is the memorial service served, but there are also special propers at Vespers, Matins, and the Divine Liturgy. These days of general memorials are:

Because of the great solemnity of the days, the celebration of memorial services is forbidden from Holy Thursday through Bright Week, and on all Sundays throughout the year.

Lity: A very abbreviated form of the memorial service is called the Lity (or Litiy), which consists only of the concluding portion of the regular memorial service. This is often celebrated in the narthex of the church on ordinary weekdays (i.e., when there is no higher-ranking feast day), especially during Great Lent.

By  His Eminence Metropolitan Panteleimon of Antinoes

Saturday of the Souls