/ Catechisms and articles / Akathist
<--Back 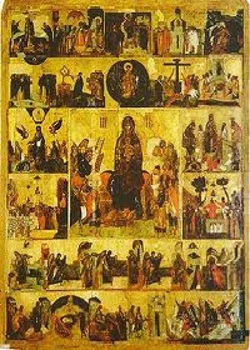 The Akathist Hymn (Ἀκάθιστος Ὕμνος, unseated hymn) is a hymn of Eastern Orthodox and Eastern Catholic tradition dedicated to a saint, holy event, or one of the persons of the Holy Trinity. The name derives from the fact that during the chanting of the hymn, or sometimes the whole service, the congregation is expected to remain standing in reverence, without sitting down (Ancient Greek ἀ- (a), [without, not] + κάθισις (káthisis), [sitting]), except for the aged or infirm. During Orthodox and Eastern Catholic religious services in general, sitting, standing, bowing and the making of prostrations are set by an intricate set of rules, as well as individual discretion. Only during readings of the Gospel and the singing of Akathists is standing considered mandatory for all. The akathist par excellence is that written in the 6th century to the Theotokos. In its use as part of the service of the Salutations to the Theotokos (used in the Byzantine tradition during Great Lent), it is often known by its Greek or Arabic names, Chairetismoi (Χαιρετισμοί, “Rejoicings”) and Madayeh, respectively; in the Slavic tradition it is known as Akafist.

From Wikipedia, the free encyclopedia