13th Sunday of Luke – Of the Rich Young Man 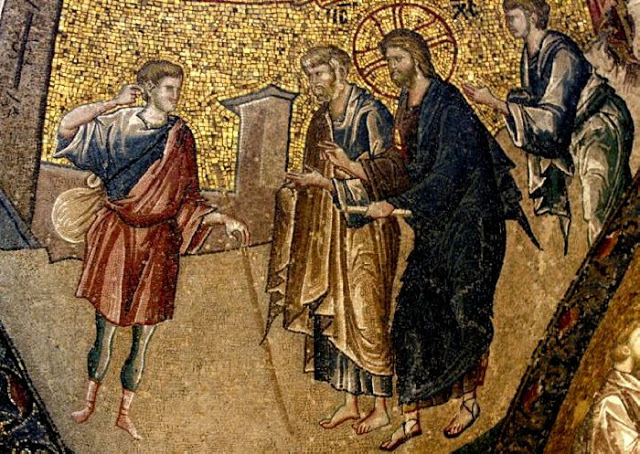 That which from a human perspective cannot happen,

God will make it happen

The rich young man approaches the Lord and asks what he can do to inherit eternal life. The Lord answers him: “You still lack one thing”. [1] And this which you lack is to sell all your possessions and follow me. Deep down in his heart the uneasiness of the young man is that he feels he is lacking something, yet he is not aware of it. And since he is informed of what this thing is, he is in difficulty doing it. And this is what is called self sufficiency. He is deeply regretful not over the fact that he is unable to do that which the Lord asks of him, but that the Lord is asking him to take off something he had never thought of.

The Lord says that it is nearly impossible for a rich man to be saved. In this way, we could  say that the “one thing” each one has –whatever this might be– and which he guards since he is a captured by it and unable to let it go, is dangerous. The Lord, however, stresses: “with men this is impossible, but for God all things are possible”. And yet, this does not mean that because God is powerful He will, in the end, save the rich man or the man who passionately holds onto any weakness. Rather, it means that God will give man the ability to finally cast off that which is capturing him and leading to his downfall. And, in this manner, the miracle happens in man’s very own soul: “God’s power is made perfect in man’s weakness”. That which from a human perspective you think cannot happen, God will make it happen.

13th Sunday of Luke – Of the Rich Young Man