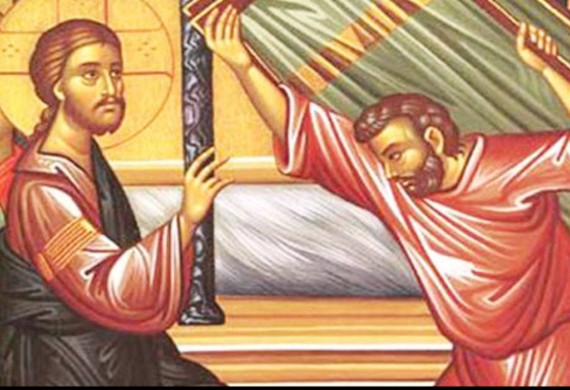 God is not unjust to anyone

For thirty eight whole years, the paralytic waited to be healed “beside the pool of Siloam where a multitude of ailing people were lying…”. Masses of sick people exist, suffer, and endure, today and in every epoch–everywhere. And yet the Lord heals one of the many. Not all: He heals one, addressing him with that unique and hopeful phrase, “do you want to be healed?” To us “intelligent” ones it seems unjust that Christ heals only one and not all the ailing.

And yet, who are you, o man, who scrutinizes God? Who interferes, and points the finger? Doesn’t God know? Perhaps you think that God has very little to give? Not enough to give to everyone? The negative stance that man takes “prohibits” God’s gifts from reaching his soul. It doesn’t matter how many times these people try to convince God to help them–by their words and by their prayers–it is as though God does not hear. The issue is not just that you find yourself in need, or that you beg to be healed, but for your soul to align itself with God, and for you to properly situate yourself before Him.

God is not unjust, and does not exclude anyone. He is not simply a man. The Lord is the creator, the one who gives the command and everything comes to be. He also has the desire to do that which we ask Him. If someone remains unbenefitted, it is because his own stance is not right. If the stance we take before God is an unrepentant one, this separates our soul from our cure, from our purification, our healing, and our forgiveness; It separates us from paradise.

Sunday of The Paralytic