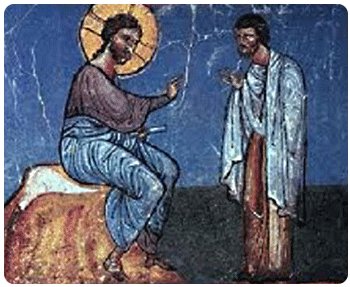 “Lord what shall I do, in order that I will inherit etenal life?”

One question which has ruled, will rules and shall rule in man’s heart of each generation and time till the end of days is: “How can I be saved?” This question, from the time of man’s creation, is placed by every intellectual man. The question concerning man’s salvation is eternal, because man’s destination is eternity.

God made man with the possibility not to die. Man had within him the possibility of not dying. This inner possibility man would had realized it, if he had had kept God’s Commandment (Gen. 2:16-17). To man was given one simple commandment, according to which man, if he kept the Commandment, he would had proven that he is worthy of God’s Love and all the Gifts which were granted to him.

The answer to the above question, which all of us have, is given by our Lord Himself: “Keep the Commandments” (Matth. 19:17)! You want to inherit the eternal Kingdom of God? Then, there is no other way but that you keep God’s Commandments. The disobedience of the first-created Adam brought death. The obedience to the second Adam, Christ, bears eternal Life.

St. Paul taught us saying:”As through one man sin entered into the world and through sin death ruled, because we all sinned”(Rom. 5:12). Sin, therefore, became the reason for man’s death. “The fruit of sin is death” (Rom. 6:23).

Sin according to the holy Fathers of our Church is the death of the soul, for the Life-giving Grace of the Holy Spirit departs. Man’s soul without the Grace of God becomes ill, weak and finally dies. Man becomes a slave under the tyranny of DEATH!

But, what is death? This is an equal valuable question, as that of what is life? To these two question Science cannot give a full and satisfying answer. According to the Teachings of Holy Scripture death is differs in three forms:

a) The bodily or biological death, which is the separation of the soul from man’s body. This separation has as its result that man’s biological instruments stop functioning.

b) The spiritual death, which occurs when man refuses to repent or lacks of good deeds or refuse to live a virtuous life. Man refuses to approach God and ask for the forgiveness of his sins. Under these circumstances, his soul is depressed in that it becomes as though paralyzed and is unable to react against the tempting and fiery attacks of sin.

Amongst the three types of death, the third one is the worst; because, if man dies without repentance, without Holy Confession, without having receiving Holy Communion, without having realized his sinfulness and unworthiness, then, he faces eternal death. Unrepentance prevents God’s Love to forgive the sinful man.

Any disobedience towards God’s Commandments consist a sin. Small or great, has no importance, all are sins which soils man’s soul. A bride cannot to go to her wedding with a filthy wedding dress. But, even all the guests cannot enter the wedding festival without the proper clothes. In a similar manner, man cannot enter God’s Kingdom, if he has not cleans himself from the stain of sin.

To this eternal question, which we all have, our Lord and Savior Jesus Christ, gives us the answer: “Keep the Commandments” (Matth. 19:17)! Our Lord assured us saying: “If anyone loves Me, he will keep My word” (John 14:23). Thus, for everyone who loves the Lord and keeps the Commandments: “do not kill, do not commit fornication, do not steel, do not give false witness, honor your father and mother” (Matth. 19:19), he shall certainly inherit God’s eternal Kingdom.

God wants all men to be saved. He does not wish for anyone to die, but rather that everyone participate in the eternal Life. God wants the creation of His hands to be vested with eternal glory and majesty, which God had prepared for him from the foundation of the world (Matth. 25:34).

God’s Kingdom awaits all of us. Keeping God’s Commandments is the only answer to the eternal question which troubles all of us, young and elders, rich and poor, educated and illiterate. “Lord what shall I do, in order that I will inherit eternal life” (Matth. 19:16)?

This is the path for salvation. The choice is ours. The renouncement of God’s Commandments result in death; whereas, the keeping of them, offer eternal Life. Let us walk with faith and hope in keeping the Commandments in order to inherit eternal Life.