/ Catechisms and articles / Το the three Hierarchs. 30 of January
<--Back

Το the three Hierarchs. 30 of January 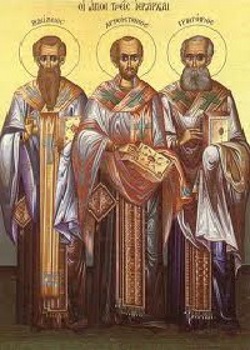 In order for us to understand the role and importance which the holy Fathers have within the life of the Orthodox Church, we must examine it under the light of the Divine Economia. But, what to we mean when we speak about “Divine Economia”?

Divine Economia is the entire work of salvation. It is the realization of God’s Will concerning man’s salvation. Man, because of Satan’s envy, was led to disobey the Divine Commandment with the result that sin entered into the world and through sin death ruled. St Gregory the Theologian teaches, that ‘God created man, because He was not satisfied moving within His own vision, but His Love had to be outpoured to other creatures.’ God wanted to raise man from the condition of innocent, ignorance and the lack of experience of good and evil, and lead him into the knowledge and free choice of good. But, the disobedience towards the simple Commandment of God brought upon mankind dramatic consequents.

The direct communion of man and the Grace of God ceased. Man was left to his own powers, deserted in the world of carnal passions, which became his nature’s master and tyrant. Man’s mind was darkened and his conscience became weak, disfigured and became hardened to such extent that he was unable to distinguish the unholy and evil from the holy and good. Man’s will lost its power and became a slave to evil desires. Love was replaced by pride, selfishness and hatred. The truth was replaced by lies; the True God was abandoned and His place was taken by the numerous false gods of idolatry. These were the few fruits of man’s apostasy and departure from God.

To understand the results of sin in man’s life, let us see the following example: As an astronaut distances himself in space from Earth, the less oxygen he has; and without the spacecraft or spacesuit he cannot survive in space, not even for one moment. In a similar manner man cannot be within the true knowledge of God and virtuous life without Christ.

Man’s entire life is influenced by his faith. The true doctrine leads the faithful’s path. If the doctrine is correct, then his way of life will be guided into the correct and God-pleasing life. If the doctrine is wrong, then the life of the faithful is led astray, accordingly. As the Orthodox Doctrine unites the faithful with God, for it expresses the Truth concerning God; in a similar way, heresy and false doctrines alienate man from God, for the false teachings separate man from the God of Truth.

God is the natural atmosphere of man’s life. When man lives within God’s atmosphere, he doesn’t fear eternal death and his separation from God. But, when man abandons the atmosphere of God, he enters within other ‘atmospheres’, which are aliened, deserted and dead, because God is absent. Man experiences death as a tyrant of his existence. Death is the absence of God from man’s life, which he willingly and by his free will has chosen.

The work of the Holy Three Hierarchs was accomplished during critical times and through the special Grace and Action of the Holy Spirit. For this reason the Church, during these critical moments of the patristic theology, emphasized their importance within Her life. In other words, as the Prophets and Apostles spoke by the Holy Spirit, likewise and the holy Three Hierarchs spoke within the Church, guided by the same Spirit of God. Within their writings it is expressed the assurance, that the entrance in the Truth is accomplished only through the help and enlightenment of the Holy Spirit.

The holy Fathers of the Church did not reveal new truths, but they enter deeply within these truths and they interpretate the different messages of the Divine Economia, giving answers to the theological problems of each period of time. The Holy Spirit is the Person of the Holy Trinity, Who inspires and gives the wisdom to the holy Fathers. A theologian, who speaks without the enlightenment of the Holy Spirit, falls from the path of truth and creates numerous of problems to the Church.

The Orthodox Church lived and lives with the holy Fathers and Teachers, who were born from Her and through the guidance of the Holy Spirit. The Three Hierarchs explained through their writings the word of God, they enlightened and enlighten the Work of the Holy Spirit, they made known and they make know Holy Scriptures to the faithful, in order that they may progress spiritually, knowing the Truth of God.

Το the three Hierarchs. 30 of January